A reader, one of those tax dodging cyclists, emails us:


"As I write, highly civilised people are pulling their buses into the lanes occupied my bicycle, trying to kill me

﻿They do not feel any enmity against me as an individual, nor I against them. They are ‘only doing their duty’, as the saying goes. Most of them, I have no doubt, are kind-hearted law-abiding men who would never dream of committing murder in private life. On the other hand, if one of them succeeds in running me over with a bus, he will never sleep any the worse for it. He is serving FirstBus, which has the power to absolve him from evil."

Well, that's right. He is trying to kill you. He is engaging, as Chris Hutt puts it, in "anti-terrorist activities". It is everyone's duty to fight the war on bicycles. It's for your own good. Now put the bike down and start saving up for a car.

When George Orwell wrote the essay that has been misquoted above, he was trying to define what Englishness was: cups of tea, "﻿old maids hiking to Holy Communion through the mists of the autumn morning ", etc. No mention of bicycles. They are a foreign invention. Possibly even Scottish. No, what Orwell celebrated included "﻿the to-and-fro of the lorries on the Great North Road", windy country roads, and the motor car. Admittedly he wrote it at a time petrol was being rationed, and if you did have any it would be for an Austin Morris vehicle whose quality control issues were a warning sign of the break down of the British factory system, a precursor to the economic problems this country has today. You could go out on your vehicle for a spin round the lanes, but you wouldn't know if you would get back. 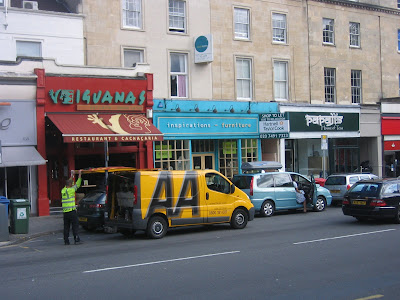 In the 1940s, a trip by car would have been an unusual event, the breakdown an adventure. Nowadays, its how you pick the kids up, the breakdown a crisis if it happens at 15:00 on the first day of school. You need help, you need an organisation that cares about you. Hence, the AA, here seen double parked on Whiteladies road as part of such a support call.

According to Wikipedia, the AA was founded in 1905 by a collection of motorists who wished to build a list of where speed traps were. This shows that the nanny state has been interfering with our rights for over a century -and that the AA has been standing up for them.

This week, the AA are pushing out a report, warning that the recession is threatening what it means to be be British.


Increased costs of motoring means that drivers are looking at ways of making motoring more efficient., This means we are more likely to question if we need to go to that meeting, can we avoid rush hour by going to work earlier or staying late, can the kids walk to school?


"﻿The motor vehicle is an integral part of British culture we rely on - whether getting to work, taking the kids to school or delivering goods. So when times are hard it is with reluctance we look at ways of cutting down on car journeys."


The report brought the shocking news that not only are some people walking and cycling to work, the increased cost of driving is encouraging people to work from home, or even to postpone their journey times to avoid peak hours. Some people have discovered that the unfair tax regime in the country now means that it is cheaper to walk your children to school.

The AA were quick to condemn this, and understand that people look at these options with reluctance. Being stuck in a traffic jam on the M32 is what defines us, and it brings in money for the government and the phone companies. If we did not spend an hour a day stuck on the M32 flyover, we wouldn't be funding the government. Or the AA.

Working from home, walking the kids to school, the AA are right to demand the government acts to stop these. ﻿Orwell's dream of a maid walking to communion has been replaced by the Honda CR-V sounding their horn at the bike in the way while the kids in the back argue over which DVD to watch. This is the dream of Britain that Cycling City is losing touch with. We must all support the AA in their campaign to focus on the real problems of the country: roads that aren't wide enough, and not get distracted by other issues, like the fact that we have got the next decade's governments forced to introduce scathing cuts to all government services through a year's worth of printing money and nationalising banks with a bigger exposure than our entire annual Gross Domestic Product.

If we do not fight the bicycles, we lose what it is to be British. We will be Dutch, or worse, Scandinavian.
Posted by Bristol Traffic at 07:25

I was probably trying to run down a bicycle.

Um, there is a reference to bicycles in Orwell. The line should read:

"old maids biking to Holy Communion through the mists of the autumn morning ..."

Or was it deliberate misquotation?

Could be a typo in the version referenced

...no scanned copies of the original article appear online, at least for UK readers. Certainly old maids on bicycles was what John Major was reminiscing about, but it's not clear that Orwell used that sentence.

Whatever you do, don't let the UK turn Dutch. Especially with regard to getting kids to school. It's just terrible over here :-)

Bugger. Must have been an OCR error by the gutenberg people. I clearly owe the Bristol Blogger beer.