Look at this. A row of bicycles down by the Arches on a weekday evening, all taking up space without paying any road tax.

Interestingly, that car parked in the bus lane, LR57XYK is a Toyota Prius of which some models are also exempt from road tax. 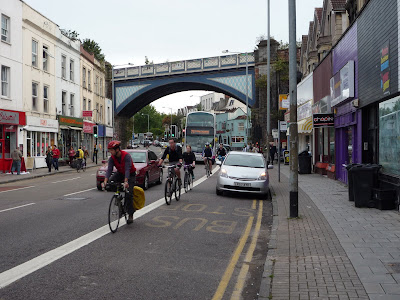 Some cycling subversives may be wondering why is it that we think it wrong for bicycles and pedestrians to use our streets without being taxed, while cars like this hybrid get away with it? 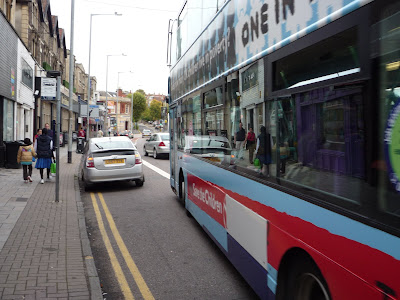 We ask these idiots to think harder. If they think it acceptable for them to use a bus lane, ASLs and bike lanes -even though they don't pay road tax, then all other road-tax-exempt vehicles should be allowed into those same parts of the road. They could be the non-taxpayers corner of the city.

This prius is not simply parked in the bus lane because the driver needed to pop into the shops, it is parked in there because as a hybrid it should be allowed to use the lane however it sees fit. 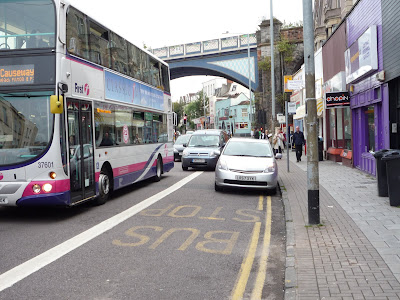 By being a hybrid it means that amount of fuel and it consumed to get to and park in this bus lane is much less than the diesel buses that have to expend energy getting around the car, or indeed vehicles like the van DK57ECV also trying to drive down the bus lane and also having to swerve around it.

Got that? It's allowed to be there, you don't.

Posted by Bristol Traffic at 08:34

Road tax doesn't exist. It's VED, or 'car tax'. Motorists do not pay for the roads, we all do, via general taxation and COUNCIL TAX. In 1926, Winston Churchill abolished road tax. Paying Vehicle Excise Duty gives no "right to the road" for motorists (or car-owning cyclists).