Yesterday we mentioned that one problem with parking on the abbeywood cycle paths was not just the new bollards, it was harassment from cyclists. Here, sadly, we have an example.

This is V134DYC, a lorry minding its own business, parked on one of the Abbeywood cycle/pedestrian paths. By getting almost entirely on the path it is not interfering with any passing traffic. 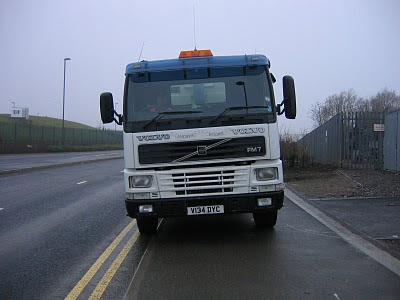 Yet our cyclist reporter felt that there was some need to criticise the driver, to take a photograph of them, "for the database".

Fortunately, our lorry driver sees their gambit and raises it by pointing out that they too have a camera in their lorry, and the cyclist looked pretty silly -which, coming from a professional hi-viz person, are pretty harsh words.


We aren't convinced that the driver saying that Hitler used to disappear troublemakers like our cyclist report actually wins the argument.
We look forward to better arguments in future.
Posted by Bristol Traffic at 07:42

I wonder if that's the Andrew John Holder that appears in this dft FOI request of Bristol HGV operators.

As some blogger (forget who) pointed out recently, Hitler left the Danes with their bicycles as he saw how much they sustained the Danish infrastructure...

Carlton Reid has done some research on Hitler and cycling.
http://www.roadswerenotbuiltforcars.com/hitler/

IIRC, Carlton found this too. It's a bicycle with a Third Reich numberplate from WW2 France. The Nazis wanted to be able to keep tabs on people.
http://is.gd/2KbEqj