We managed to sneak some photographs of the subversives on the Bristol Bike Project. They aren't giving the bikes away, or selling them. They are making the people who want a bike come down and fix one together -under supervision. Here James is showing Mohammed from Ethiopia how to set up the front derailleur/click-shifter. 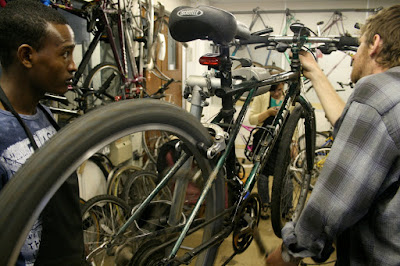 Nearby, Alfil and Asad are admiring the bike they've just got lights and mudguards on, under Colin's supervision. 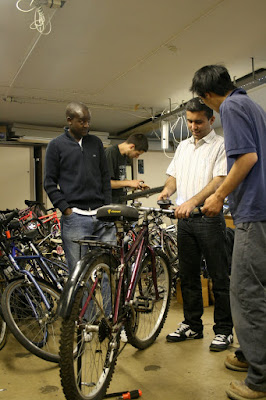 The students are even learning how to fix punctures. 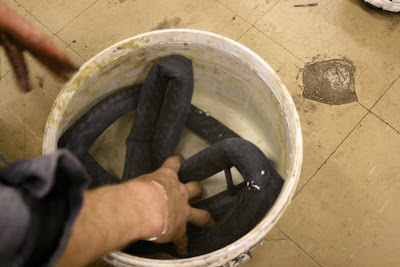 This "earn your bike" program is quite subversive
That's pretty devious, and by the expressions on the refugees' faces, you can see they are looking forward to getting out on the bikes. 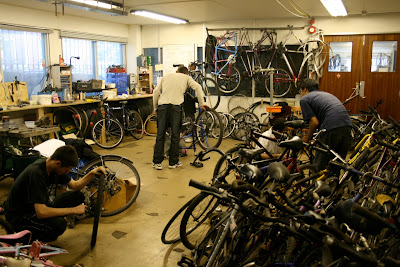 And that's the problem. Right now: refugees, asylum seekers, Big-Issue vendors. The underpeople of the city, despised by we, the Daily Mail reading majority of the city. A scapegoat-group for all our troubles.

But at least they stay out the way. Once they have a bike, they are free to get in the way of us taxpayers, and so become members of a completely different scapegoat-group -the town's cyclists! A group of people more broadly hated in the mainstream press than any asylum speaker would ever otherwise be. They have no idea what they are getting in to.
Posted by Bristol Traffic at 08:00