Going over the edge in Kingsdown

Always interesting to see what notes get stuck on car windscreens. This car is parked legally, not blocking any junction or driveway, isn't even within 50' of a junction, that being a parking law that doesn't exist in Bristol or any other UK city. Ever. 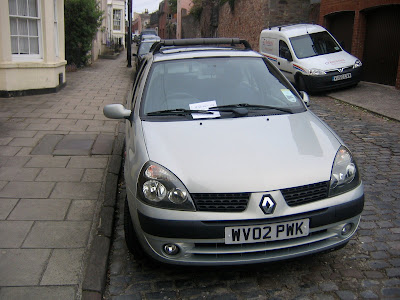 What does the note say? 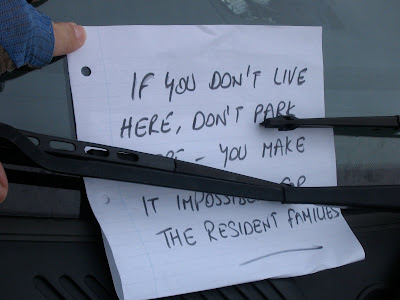 "IF YOU DON'T LIVE
HERE, DON'T PARK
HERE - YOU MAKE
IT IMPOSSIBLE FOR
THE RESIDENT FAMILIES"

Perfect punctuation, capital lettered. Someone spent time on this.
The problem is, parking on a road where it is legal to do so, not blocking driveways etc is in fact technically legal. So there isn't much you can do about it. There's also the question of what the resident families were planning on doing with their cars -they weren't trying to go to another part of town themselves, park in front of someone else's house, do a school dropoff or similar -where they?

It would seem equally legitimate for this commuter to go round putting notes on everyone's doors complaining that the resident families make it impossible for commuters to park. And for both the resident families and the commuters to put notes under the windscreen of every car owned by a resident that doesn't get used for commuting or school runs, but instead sits there while the parent -selfishly- doesn't drive to school or work. It is those people, the so-called environmentally friendly cyclists, who are the worst. Not only do they slow cars down on the road, by leaving their cars in the street, they are the ones denying the rest of the city parking spaces!
Posted by Bristol Traffic at 07:13