Police Stopping bikes on the downs

We'd heard that the police were stopping bikes on the downs, so nipped up to see if the cyclists were being the good beating they deserved before their bikes were confiscated for not paying any tax. 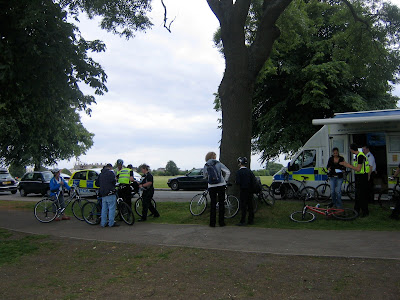 Oddly enough, this was not happening. Instead the cyclists seemed happy and the police were even there on their own bicycles. What was going on? 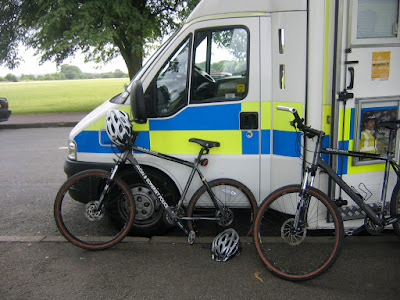 It turns out that they were putting RFID tags into the frames, so that if the bikes get stolen and recovered, it's easier to link up with the owners. And perhaps the tags (and the markers indicating tagging) will discourage theft, as it becomes hard to say its your bike when someone else had registered ownership and theft of a bike containing the specific ID tag 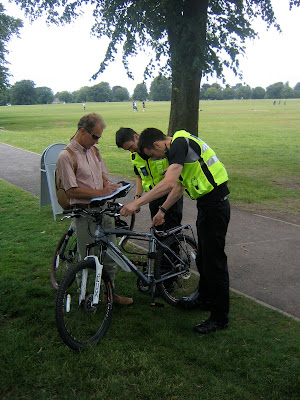 At which point a devious idea slid into view. These cyclists are being stopped by people in high-viz clothing, having something stuck into their inner frames, and then fill in some name and address paperwork, before cycling off happily.

If you wanted to get the addresses of bicycles you wanted to steal, this is the way to do it. Rather than follow mountain bikers home from Ashton Court -something thost cyclists are aware of and fear- just wave them down, offer them a free id tag -in reality a piece of plastic- and get them to fill in their address on a form. They tell you where they live, you go back later and grab the bike.

Now, the next question: how can you determine that this is not exactly what was going on on the Downs, and, apparently, will be repeated on the Biggest Bike Ride event on Sunday? Are these really police, or is it just a big bike theft trick?
Posted by Bristol Traffic at 14:57

There's another angle to this that we should all be worried about. Once enough of us are persuaded that the RFID tag is our friend, and their use becomes common place and even compulsory, the police will have a simple way of identifying any cyclists passing a red light or riding on a footway or the wrong way down a one-way street.

You see the RFID tag can be read remotely from several metres away. The anonymity that cyclists have long enjoyed on the roads could be about to end, brought about by our own naivety in thinking that Cycling City is anything other than an instrument for the extension of state control over our lives.

I did think about that too, but then given everyone has mobile phones with them, its semi moot. And to measure the bikes going the wrong way up one way streets, well, you need two sensors (at either end) and enough range to detect a fast moving bike but not enough to pick up the tags out of order. Similarly, how do you tell a bike has gone through a red light just because you sense it arriving and then departing? Very tricky and not really capable of generating anything that stands up in court.