Only a few days after visiting the Bristol Bike Project, and already we can recognise the signs of one of their donated bikes.

It's not the bike itself -there's nothing wrong with having a twenty year old supermarket-grade mountain bike that is still running the original Tioga Farmer John tyres and thumbshifters -retro is back in you know, though ideally with bikes that were actually good in 1991. 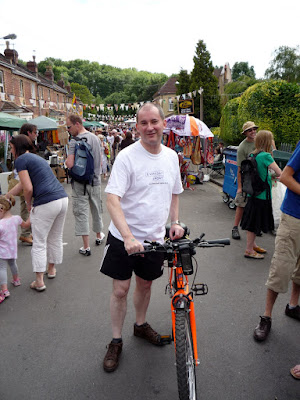 The real clue is the way the owner treats it. Rather than as an undervalued utility vehicle, the people that those subversives in the Bristol Bicycle Project have been supporting are so poor, so deprived, that this is about their only possession -so they love it and value it more than anyone else. It's that expression of care that gives it away. Instead of leaving it in the manned bike parking area, this bicycle is so precious that the owner brings it with them at all times. 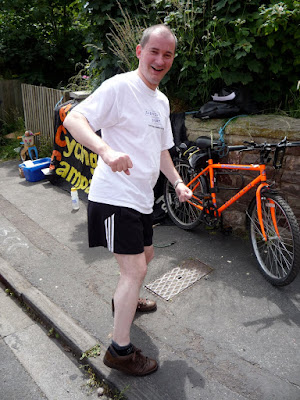 The other sign is the general unhealthy appearance of the individual. Not only does he have a strange accent from abroad, his body looks as though it has been neglected over the years, with their legs and arms taking on the pallor of someone unwell. It is the classic suntan of someone from a Glasgow or Edinburgh housing estate, the "Trainspotting Look".

This particular individual said that although originally from Wales, he was chased out of his country for his political beliefs (LibDem). He now has to regularly travel to London to seek work. Many local political activists have told me that it is unfair that he should suffer this way, and hope that he will soon have to stop such travel. We in Bristol Traffic have no opinion on the topic, other than to express our concern over the state of his legs. A bit of sunlight will do wonders there. Coming out to the St Werburgh's fair could be the first step in this recovery process.

Posted by Bristol Traffic at 07:45

I had the privelege of opening the new Bike Path from the Farm pub to Muller Road that afternoon with said "refugee from Wales", hence we both had our bikes with us.

As a GP I make no additional comment on leg state except to agree that more "sunlight will do wonders"!

mmm, doing Nine-tree hill on the way home would do something for those calf muscles too.

well they're probably the fittest pair of Parliamentary legs in the region.... I admit I do most of my exercise indoors, at Kingsdown
Sports Centre. If I'd turned up in a suit to open a cycle path then you would have been spared the sight of my white legs.

I wouldn't pay much attention to Labour redictions of my demise if I were you!