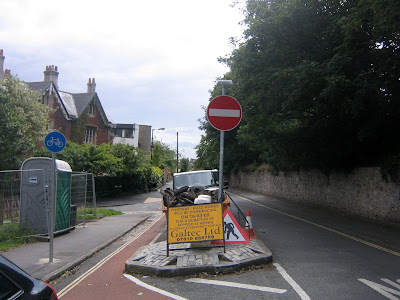 Why? Because it creates a blind spot for bikes when they merge with the cars running the no-entry signs, such as WM56ESN, at 3:07 pm on a weekday afternoon. 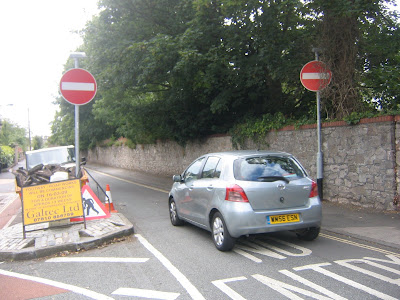 If the bike contraflow was blocked by the skip and van, bicycles would be forced to go through the no-entry signs, and so integrate better with the main flow of illegal traffic.

(Saw this on the way up to the police RFID giveaway on the downs, and was taking the picture of the van and skip about to criticise them for not following the builder's code "always block the bike lane first", when I hear the sound of this car accelerating hard behind me, so, keeping to the side I left the camera ready to grab the shot. This car went through at speed, and after I'd put the camera away, two more followed it. Presumably these people used to use this road to bypass the roundabouts at the downs, and even though it's been made one way, they have retained "Grandfathered rights" to ignore the signs.)
Posted by Bristol Traffic at 16:47

There is much debate locally about this one-way section of road. In my humble opinion it has caused a great deal of traffic congestion and lowering of the air quality locally. But I guess it has meant the roads department has spent its budget. However, I think that cutting down the signs and then driving through would be a more artistic form of protest. Banksy where are you when you are needed.

-I used to drive down there too, and I've heard from others nearby about it making the road past the hospital worse. But like you say, ignoring the signage isn't that useful a form of rebellion. Now, painting over the signs would be funny,