Waiting for a bus at Bristol Airport

A line of people waiting for a bus at Bristol Airport. Clearly the airport's funding of alternate transport arrangements are paying off and these people are taking a fast and easy journey back to Bristol, instead of creating more congestion on the A38 and more pressure for a South Bristol bypass. 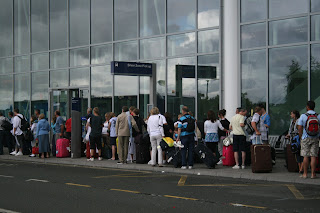 And here come the bus - I wonder where it is going? 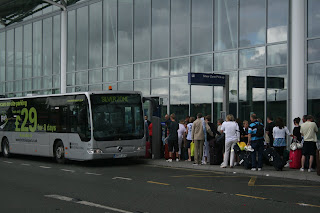 oops. Its going to the silver parking. These people are creating more congestion on the A38 and more pressure for a South Bristol bypass after all. 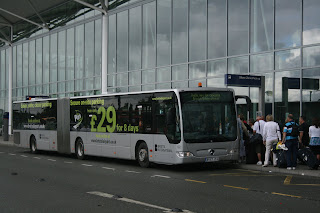 And why not? As the advert on the bus says, its 29 quid for a week's parking. The bus charges 6 or 7 pounds one way, 8 return. There is a family return for 20 quid, but that still leaves you with the problem of getting from the bus station to your house, and unless you live in walking-with-luggage distance of one of the halts, that's going to involve another bus or a taxi. Probably a taxi, as that will usually cost less than a bus for a family of four.

Of course people are going to use the airport car parks. And as the airport's business model is based on charging the airlines next to nothing and making money from the added value extras, the money they make from parking, from the bus or from the premium they charge the one permitted taxi company must be a significant profit source to the airline. They like you to drive, they want you to park. It's profitable.
Posted by SteveL at 22:45

The bus link to the airport is outrageously expensive by European standards. For example Madrid to Barajas is about £1.50 each way (and that's by a rapid metro link), which is fairly typical.

Also the bizarre British system of charging only marginally more for a return ticket compared to a single means many visitors accustomed to rational ticketing systems buy singles, so paying £16 return!

Also it discourages you from doing half the journey by bus (i.e. the return) while doing the outward half by family/friend dropoff or taxi. Because if you go out by bus, your scheduling is a lot more complex, you need to leave a lot more time. On the way back, that is mostly irrelevant.

Some times you are to quick to comment, of course there is a line of people they have probably all just got off the same flight. It's to be expected. Also did you ever think that it's not only people who live in Bristol who use Bristol Airport?
Of course I'm going to use the silver carpark when I live an hours drive away (by car) and would need to get several buses and take about three hours if I tried to use public transport.

David. Even if you live in Bristol driving there makes sense. Which is what we were arguing: the current transport options from the nearest city are overpriced and slow. Now, if everyone who lived in Bristol could get a low cost bus from the part of the city where they lived, then that would free up parking and traffic space for those further afield. And who knows, they could run some buses from other nearby towns and cities. Mind you, when we last got a bus to LHR and back, it cost us 80 pounds return for three of us.