Even the airport company admits that the departure lounge at Bristol Airport is overcrowded; that is why they tried to sneak in a planning permission request to add extra gantry buildings and waiting areas, so doubling the area where people can sit.

In these mid-August photos, it's pretty much at capacity 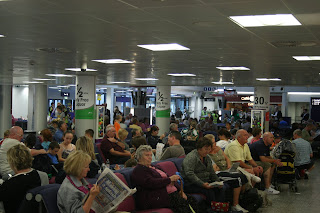 With people sitting around or queueing for their flight. 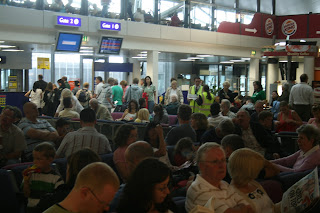 Except here, in this fairly large section of the waiting lounge that has no seating, and instead has three cars to admire and a raffle to enter to maybe win one. 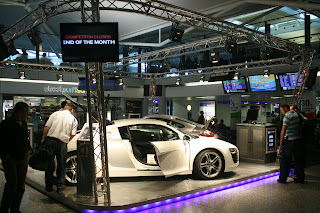 Some people might consider that dedicating a large slice of the waiting area to a few parked cars was an insult to the customers; making a bad situation even worse, and focusing on profit at the expense and happiness of their customers. After all, if there wasn't such pressure for seating, why would the airport have applied for that expansion?

But those criticisms miss the point. Most of the people at the airport came there in a car. They are now stuck waiting for a plane. Why not have other cars to look at during that waiting period? Furthermore, the customers are perfectly free to go to different airports or make alternate holiday/transport arrangements. If they are going to try and fly on low-end airlines, this is how the airports are going to have to make a living. That and parking/bus/taxi fees.

Apart from that, if an airopet is adding to it's terminal, then it is Expanding. This is What The Shareholders Want To See. By artificially creating overcrowding, they create a need for expansion which gives an impression of growth. Which is of course the most important thing in the universe.

Besides, passengers can only blame themselves. If no-one put their address in the car, then the companies would stop putting cars in the buildings.