Relax before you fly

At BRS airport, there are adverts on the stairs saying "relax before you fly", with a pointer to some site selling access to premium lounges. Which implies that that there may be an executive lounge somewhere in the airport for premium travellers who don't want to experience the tblisi-airport-evacuation experience that most travellers get. 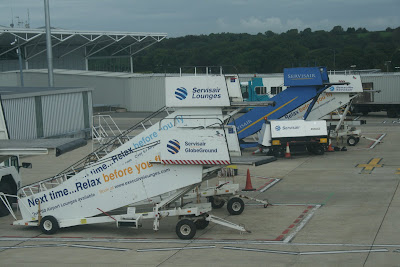 One way to relax before you fly is to avoid using the airport approved checker cars taxi service, at least until they have got their newly-upgraded software working. Because if you book an 05:30 taxi pickup, that means "taxi at my house in Bristol at 05:30", not "taxi driver gets the pickup notification at 0530". Now, dedicated driver that he was, he managed to get from the airport to city and back again by 06:15, but things were still pretty tight. Only the friendly easyjet staff (nothing positive to say about checker cars either) and the vastly expanded security area meant that things worked out. Some discussion with the taxi firm -possibly cc:d to the airport- may be in order. Because when you pay the premium for a taxi over the bus, what you are buying is the option to get there in time. After a near-disaster at a time in the morning when things should be calm, how can you trust the taxi company and their software during peak hours?

Still, it could be worse, I could have been an XL passenger. Which raises an interesting question. How many airlines are serving BRS other than easyjet and ryan air, and what assumptions have they made about fuel costs and passenger demand?
Posted by SteveL at 21:32

airport-approved? more like a complete monopoly that charges nearly £30 for a short ride.

Yes, it is a defacto monopoly. What I don't know is how much they pay the airport for exclusive rights. Is it a per-trip fee, or is a franchise they pay for every year?