Over in Copenhagen, the chic cycling movement advocates cycling in normal clothes. As we do in Bristol too. The difference is that the average Scandinavian cyclist is generally tall, blond, fit, beautiful and worth looking at, especially in minimal clothing. Whereas we Bristol residents are somewhat less appealing. We also have an odd sense of fashion. Rather than put on bright reflective yellow clothes just to cycle round down, we are now going the other way, making wearing reflective gear at work as much a fashion statement as shorts and sandals. Here we have Rowland Dye of the Bristol Cycling campaign modelling a yellow top with his day to day clothes, while Councillor Faruk Choudhury shows that it goes well with his suit. 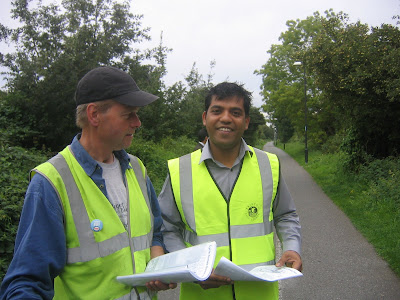 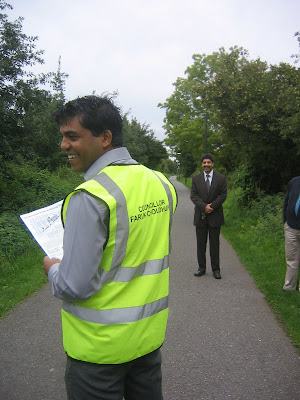 Which even has his name on the back.

We are looking forward to attending the next full council meeting, in the hope that we will see all the councillors wearing their officially issued, Bristol Cycle-City-Chic clothing.
Posted by SteveL at 20:56

It's a brave (or foolhardy) man who cycles up and down the Railway Path with Councillor Faruk Choudhury printed on his back, after the council vote last April 1st (we won't forget).