Joe Evans posts in a set of clips of motorbikes taking advantage of the facilities in Bristol, and says: Bristolian motorcyclists are a selfless bunch. 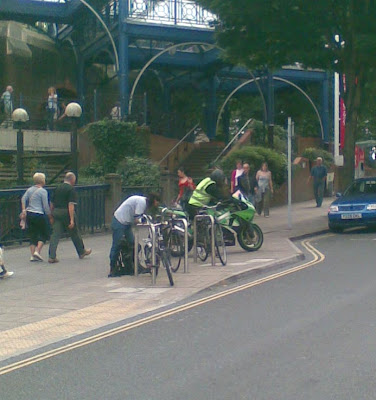 Here we can see them in action as this biker risks getting a fine for parking a motor vehicle on the pavement in order to show cyclists exactly where the stands are located by placing a bright green motorbike beside them. This new ‘Green Motorbike’ scheme is very useful of foggy days when vision is restricted. There is, however, one slight disadvantage to this means of alternative signage since the motorbike often needs to be parked as close to the stand as possible, but not exactly touching it (one nano-millimetre is preferred) and thus reducing the space available for cyclists. 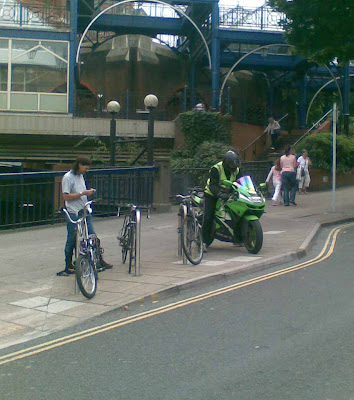 This poor harassed motorcyclist just couldn’t decide which bike stand to block..er..use. Up and down the pavement he went on his motorbike..er, sorry, that should be ‘Alternative Hydrocarbon-Fuelled Powered Two Wheel Vehicle’ (official government definition. Makes it sound a bit like a bicycle so that cyclists won’t mind them racing in the bus lanes or taking short cuts through cycle lanes). Eventually, after riding up a one way street, he eventually found a cycle stand to not use and was relieved that he wouldn’t risk the possibility of receiving a fine by parking a motor vehicle on the pavement due to Bristol City Council’s cash cow policy of milking poor innocent motorists of money 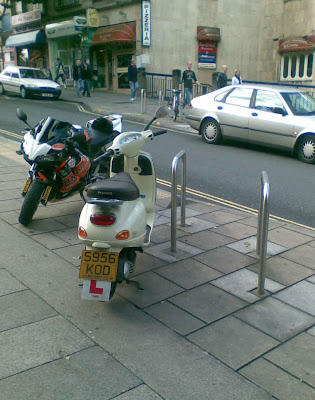 In a hurry?. Use those cycle lane things 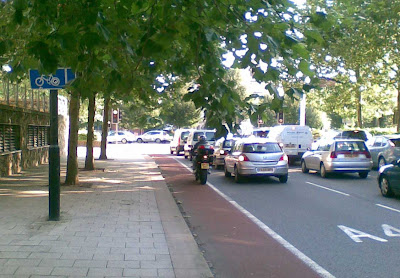