Joshua Hart has done an interesting study in Bristol, which shows that people who live in streets with more traffic visit their neighbours less. 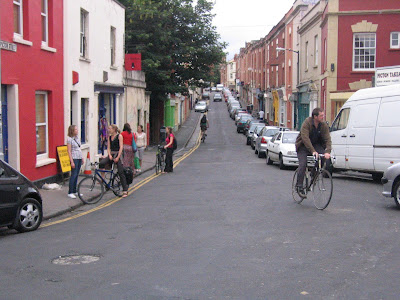 This is interesting, but what cannot directly say is "living on a busy street makes you friendless". Why? Because one possible hypothesis is that friendless people choose to live on busy roads. Houses on/by busy roads cost less, they are often divided into flats and may have higher turnover. And it is that turnover that may effect things. What would be interesting would be take one of the roads in the study -such as Muller Road- block it off to car traffic for a month, and see if that leads to increased neighbourliness. Having seen the consequences of Cotham Brow being closed to traffic, and how much quieter the whole area became, the results may be surprising.

Another possible hypothesis -though it seems even more unlikely is this: if a street forms a strong community, does its traffic decrease? mu
Posted by SteveL at 22:51

Thanks for the post about my study, Steve. Important to keep in mind that I've never claimed that "living on a busy street makes you friendless" just that if you live on a busy street, you are less likely to develop friendships with your neighbours.

Turnover is a factor. Muller Rd. (heavy) had an average length of residence of about ten years, compared with about 20 for Filton (medium) and Dovercourt (light). However, community had been considerably diminished on Filton, despite the fact that the average stay was the same as Dovercourt (light street).

This concern about whether more social people choose lighter traffic streets has been raised as criticism of the original Appleyard study (the so-called self-selection bias). I looked at this issue, and found that social ties across the street eroded much faster than those on the same side of the street- this indicates that the immediate street environment is a major influence- it's not just the personality of those living on the street that affects formation of social ties. (see p. 46 of the study for a more complete analysis).

To your last point, I would say that yes- thankfully it does work the other way around (at least to some extent). If there is more community on the street, people will spend more time on the street. This has been proven to slow down traffic, which in turn allows more people to feel safe walking or cycling. It may be subtle, but it is an example of a "virtuous cycle."

One last point- living on a busy street may very well affect your perception of street safety for the entire city, and therefore your travel choices. While all the parents on Muller Rd. drove their kids to school, only about half on the light street did, even though the route to the local school is the same- it's all about perception....