And why the airport travel? Because the West of England Partnership have recognised that the contributors to this blog are doing more to improve travel in the area than their previous set of consultants, so are funding our trips to different parts of the world. This week, a look at how the south of france deals with their traffic problems.

Look at this. Its a school, with the same car-on-pavement problems as all of Bristol's schools, but fixed. 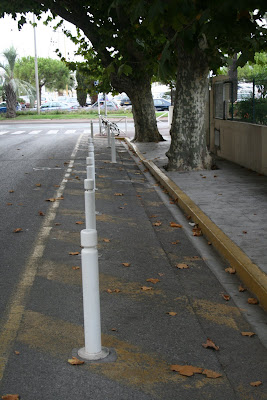 A set of bollards away from the kerb effectively stop any parents, even if they own 4X4s and are really important, from using the pavement parking area. And you can't park in front of the bollards as that would block the road entirely, which is generally considered bad form. 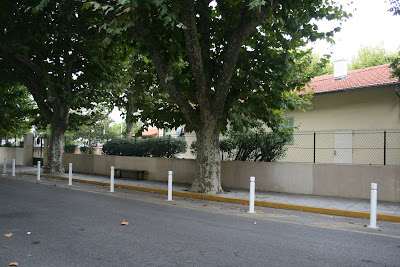 This is clearly wrong, as it denies these important people the right to park their cars next to the school, so forcing them to park further away and walk, costing the parents 10 minutes, twice a day. With 110 schools in the city (i.e. ignoring nursery and private schools), and room for four cars in front of each, that's 410 cars/day parking in directly front of Bristol schools, a total of 8200 minutes. Which, under the revised NATA road costing rules, means that allowing parents with cars to park directly in front of the school, saves Bristol's drivers lots of money.

No, Bristol should not use such low-cost techniques to stop parking in front of schools, when we can show that such parking saves the city's parents so much money.

How do they deal with fire access with all those bollards in the way?

We have a different but equally effective methid outside our village school here in Germany: the road has been narrowed to one car width right across the gate, and this area is now a zebra crossing.

Fire? I presume they just run the hoses a bit further.

I think in Bristol, narrowing the road would only provide an expanded parking area, unless bollards were installed.

I think we need to have access to the building itself here, judging by how seriously they take fire lanes are.

However, today was my son't first day at school, and we found an interesting sight awaiting us: a police car parked next to the school with policemen ticketing drivers who didn't stop at the crossing, or who parked on the no parking area. They were ticketing someone as we passed.

What a nice start to the day.

Photos of such events are welcome!

The police event would be lovely to see in pictures!