Terry Miller sends in this photo of some of the "improvements" near Cabot Circus, on the junction of Bond Street South and St Pauls Street. 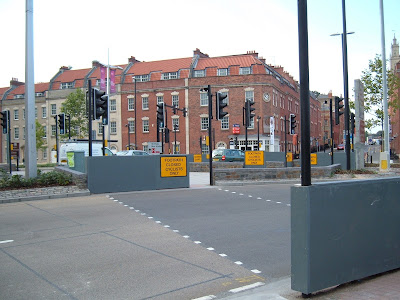 Terry states that although he got off his bicycle to take the photograph, he was standing on "an open shared use pavement" so there was little risk of the police giving him a spot fine for walking or standing in a cyclists only junction. He also says:

If these will stay:-

We look forward to the opportunity to write letters to the Evening Post complaining about pedestrians getting in our way, as having someone using a cyclists only facility in the city is as as wrong as those fell runners who go round the Ashton Court MTB trail because they like the mud. Cycle facilities are for cyclists!

There is, however, one little question. Why do this? The purpose of road crossings is to provide a safe way to cross roads. If the crossing gets taken away, will the people suddenly not cross the road? Or will they just run out anyway? It would be interesting to have a discussion with whoever designed this junction to discover what assumptions about pedestrian (especially child) behaviour they had made, what experiments they had perform to test the validity of the aforesaid assumptions, and whether they were to engage in long-term monitoring of the facility to see if the assumptions held up in the field. Civil Engineering may not be a science, but there is no reason why it should not be scientific in its approach.

Now seeking: photographs of pedestrians ignoring these signs and inconsiderately inconveniencing cyclists.
Posted by SteveL at 10:29

It all looks fine to me - completely in keeping with standard Ring of Steel street design. Just the sort of thing needed to encourage people out of their cars.

Coming soon to a junction near you - armoured cars, checkpoints, and the observation that, "Your papers are NON in order" or "For you, Tommy, ze kommut is over".