Bristol to get a Congestion Charge

It may not have hit the Evening Post yet, but the civil engineering press knows: Bristol is bidding for congestion charging. 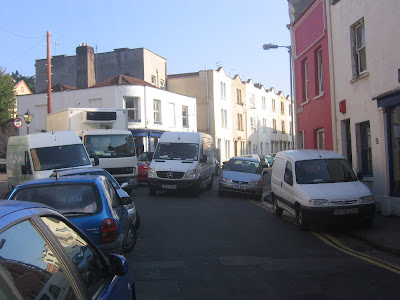 Which, given that it has serious congestion problems, makes sense. Not only does it make walking and cycling more cost effective, it lowers the cost advantage that driving has over FirstBus (of course, value fares and an effective public transport system could also do this) and makes the cost of driving into town more tangible than a weekly fill-up or yearly service+MOT+insurance. It also penalises people who use the car, rather than just own one but leave it outside their house on weekdays. And, if we follow London's lead, the charge can be made worse for group G cars and less for hybrid/zero pollution cars. More subtly, London doesn't (currently) offer a resident's discount on a Group G car, so if you live in the C-zone, you get to pay 25 quid a day for driving your Porsche in to the city where you get to unwind your hedge-fund's exposure to the US. It is this daily fee that has really killed the group-G resale value in the south east, and so deflate demand across the whole country.

But:
So: a fee that is focused on those people who drive round the city. with a fairly complex billing scheme to make it all work. we shall see. An alternative option would be to enforce parking rules in the city as it stands, so reducing the parking spaces by 50%, and therefore discouraging vehicle use without so much of an infrastructure behind it.

The claim that Bristol loses £350 million a year due to congestion is nonsense. These figures are contrived by giving values to people's time that assumes any saved time will be spent in productive employment instead. That is highly questionable.

The time spent in congested traffic might be more akin to relaxation time - you're sitting down listening to music or the radio, engaged in an activity that requires only a minimal physical and mental effort.

Besides which people choose to make journeys or not depending on how much time they expect the journey to take. Reducing congestion will result in more travel as people make longer journeys, so spending much the same time in traffic.

Even more bizarrely, the government views being stuck in traffic as a revenue source, as it burns (taxed) fuel.

The council have been quite busy rolling out a lot of new "traffic cameras" at major road junctions around the city. Usually attached to lamposts, and very inconspicuous. These days you can run ANPR off of any video feed, so don't think that some of the infrastructure isn't already there.

I would so love to get the anonymized data; you could do some profound things. Work out the speed across the city; work out the traffic flow. I was trying to sell that to some of the traffic planners at this month's cycling forum -when I said they could see who comes from Wales, who comes from Swindon and where they go in the city, their eyes lit up.

Apparently all the speed/light cameras can track number of vehicles, so even if they don't measure who, they can measure how many.