The Kingsdown Residents are a bit worried about plans to land a helicopter on top of the BRI; it's a classic stitch up of mock-consultation (ehere a note acknowledging receipt of the warning is used as proof of consultation) and accompanying documentation, all of which is in the planning application. 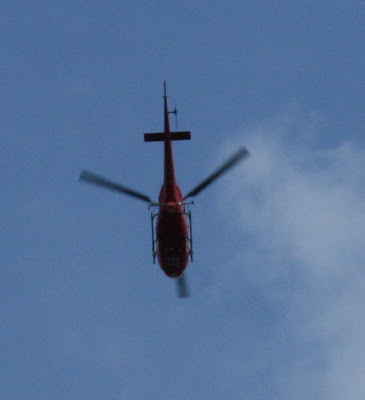 The business case document is interesting, the rationales for the 'copter being many:
So, either its a status symbol for other health authorities, a valuable part of the health care system, or something to compensate for all the traffic jams in the city.

What is interesting is the noise study, which shows that Kingsdown and nearby areas don't gain from having the air ambulance. Because although ambulances were noisy, they always came in the front of the BRI, along the main road. Now they will go over your house. As long as you sleep with the windows closed, it won't be "significantly" above the BS8233 noise level standards for noise levels that disturb your sleep.

People who live near the hospital come off worst, but according to the study that's OK, as there aren't that many. "It is therefore considered that the overall impact of the proposed Air Ambulance Service is small and therefore that planning permission should be granted."

What is lacking from this assessment (or the business case) is any estimate of the number of flights a day and their times, and whether there will be a change in the estimate number of ambulance journeys. Without which, you can't say how noisy it will be, what impact it will have on the city. That said, given that every Friday and Saturday night the Police helicopter is out and about, it probably won't add to the noise levels of that part of town. It would be interesting to see a noise level study of that vehicle's travels.
Posted by SteveL at 20:08

Are you seriously twining about noise and fuel costs for an air ambulance?

I usually agree with a lot of the comments on here but this is ridiculous.

The people who live right next to the BRI are in trouble, because they will get it the loudest and most often - I feel sorry for them.

Fuel-wise, running a helicopter is expensive, very expensive. If it came from the same budget that isn't paying for my knee repairs because their goals "leave his knee working enough to limp to where his car is" are at odds with mine, then i'd be unhappy. As it is, it comes from a charity. But wait a minute, if an Air Ambulance is so essential, why is it dependent on charitable donations?

are air ambulances not essential then?