Clifton Bridge is closed to cars; open to pedestrians only. 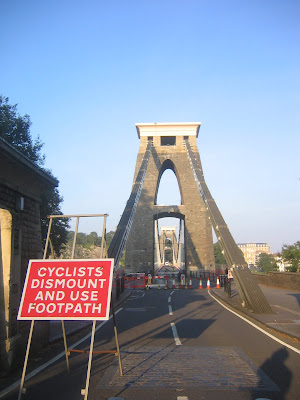 A big sign tells the cyclists to get off their bikes 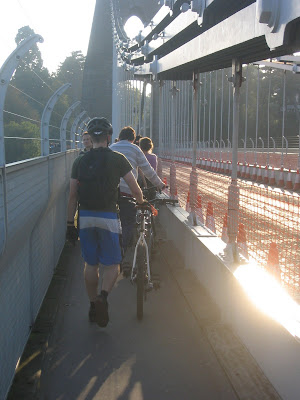 Which is important to do, as if you get on your bike at the end, even at 7pm when there are no pedestrians around, someone will come out of the gatehouse and harangue you "I could fine you 30 pounds". Best not to cause trouble. 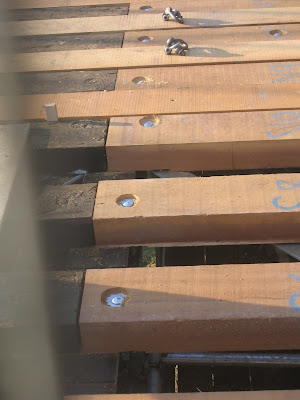 What you do get to see is the tarmac peeled back and the dark secret of the bridge, a secret that all the climbers on Suspension Bridge Buttress know and fear: the bridge is made out of wood. Old, 200 year old wood. Which, considering the life of oak beams is about 200 years, is kind of disconcerting. Here we have a bridge built at the dawn of industrial era civil engineering, when the best practises evolved by the Romans were discarded in favour of new techniques (suspension) and materials (iron bolts), and the early bridges were effectively wide-beta tests of the ideas. Wide beta tests built on the assumption that the primary traffic would be pedestrian and horse and cart, not a transit van full of alcohol bought on a trip to France. We are lucky that so far they have been shown to have designed well, and now the wood is being replaced in a timely manner.

With the 2cm of tarmac pulled back, you can look through the gaps of the 10cm wood beams, to see the ground 70m below. Think about that the next time you go over it in a heavy car.
Posted by SteveL at 11:29