This is written on the anniversary of the 'Bristol Blizzard', exactly one week ago, here in Bristol on the 20th December 2009. A night that saw the snow fall, the council accused of not gritting roads, and the local blogosphere erupt with accusations of Bristol City Council's mis-management of winter. 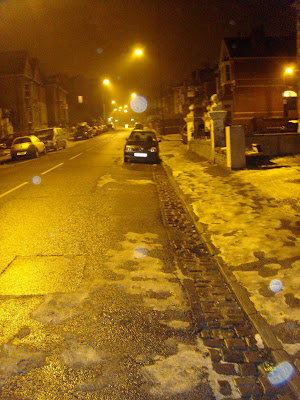 Here's a photo of Zetland Road, taken in the early hours of Christmas Day. The road is clear, confirming that Bristol City Council are nowhere near as bad as they are painted by the bloggers.
Look at the road - cleared for cars and tax-dodging cyclists after only four days!
Pavement cyclists across Bristol, however, had to suffer for a further three days before their preferred routes were cleared by global warming.
Bristol Traffic says: HO HO HO!
(PS: and stuff you, pedestrians, you little people:
remember - Get A Car = Get A Life).
Posted by Quercus at 07:00