The RNIB/bicycle conflict: speaking the unspeakable

We are really enjoying the debate started by that the Evening Post's insightful article showing how cyclists endanger blind people on our pavements. Clearly it's something we agree with.

However, one of those cycling troublemakers, went out trying to get some photographs of the tax-dodging criminals, and failed miserably, picking up lots of photographs on cars on pavements and bus and bike lanes instead. Well yes, there were a lot of them in the photograph -and that's precisely why there were no bikes on the pavement. It was only the selfless effort by many of Bristol's car drivers that they managed to keep the areas that Dru cycled to free of bikes on the pavement. She should be grateful, rather than implying that the whole story was made up.

Question is, what about the RNIB, down by their offices on Boot Lane, Bedminster. What is their bike-on-pavement problem really like? We sent one of our reporters down there.

We can conclude that whatever the problem was, some selfless work by the drivers of vehicles like SA06YVJ keep bicycles away from blind and partially sighted people. 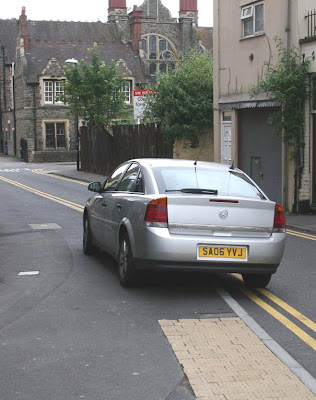 Similarly another car SJ04WDB? selfless endangers its wing mirrors to ensure that no bicycles can even consider coming down this pavement at speed. 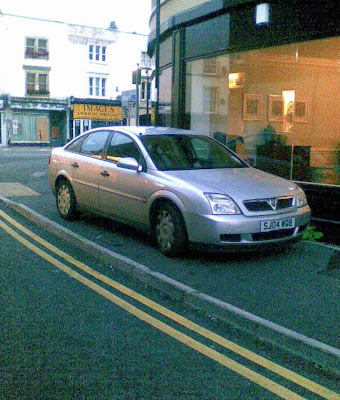 Such selfless actions by the community show how, given the complete failure of the police to enforce the cycling rules, locals are forced to take actions into their own hands.

Returning to the debate, things have moved on. The Bristol Cycling Campaign wrote a letter to the paper, complaining about their persecution in the paper. Not once did the tax dodgers complain about the wrongs their members may have done, such as cycling on the pavement or going past the ASL stop lines. Instead they whine that the reporting by ourselves and the evening post are encouraging anti-cycling feelings. Fortunately, the readers of the paper see through this, as can be seen by the many comments. The most seminal has to be from, apparently, one James Carmichael of Highridge:


We've spent years rationally asking cyclists to behave better, and to indicate they're not welcome on our roads, but like all vermin that are left unchecked they continue to multiply.

So, maybe now is the time to get a bit more 'direct' in our action. I am not condoning breaking the laws, or doing anything that endangers life. However, maybe a little more assertive driving around cyclists or some 'verbal feedback' is the only way to get the message through. I for one, will continue to make my point to the cyclists that get in my way.

We hope he's using an assumed name, because James has come out and spoken the truth they dare not print. The issue here isn't really bikes on pavement, that's just an excuse we use to make them look worse. The real issue is this: bikes on the road. And there isn't (yet) anything we can legally do about that. Instead we have to complain about the pavement cycling, or drive more aggressively. Just a bit of "verbal feedback", nothing illegal. Or "assertive driving". You know the sort. Drive at speed right behind the bike, or on a narrow road, pull out wider when coming towards them. When passing, cut in early. Nothing illegal, just enough to make them feel threatened, to feel unwelcome. To know the truth: they don't belong in Britain.

James is offering a hate speech by the looks of it, silly little man.

There's also a Q. by the same "James Carmichael of Highridge" asking firstbus about bikes in a bus lane


6. How does First intend to deal with the fact that it is currently obliged to share bus lanes with cyclists, leading to delays in bus services?

The definition of a bus lane is not ours, it is the city council, they put out traffic orders which say it can be used by taxis or cyclists.

We don't necessarily see cyclists as a problem.

The biggest problem is motorists or delivery vans parking in them.