Some people point to our linking to Stolen Bristol bikes, as a sign that we are not really anti-bike. However, we don't like bikes being stolen as (a) they get replaced, so increasing the number of bicycles in our streets and (b) the people who steal bikes move up to cars later. Believing that bike thieves should be put to their death before they have learned to drive does not conflict with our other belief, namely that cyclists should be beaten soundly with their own bicycle before being made to pay 15 years worth of back-tax on their vehicle. Indeed, we hope to see the DVLA van performing such a service rather than clamping car drivers who innocently forget to tax, MOT and insure their cars.

We do not like to hear of stolen bikes. Sadly, today, this one: a Marin aluminium mountain bike, rock-shock suspension forks. The key features: small child seat on the front and the seat-post attachments to clip a tagalong and second small child on the back. Taken from near Fairlawn Road, Montpelier, while the father was returning the tagalong to the house. 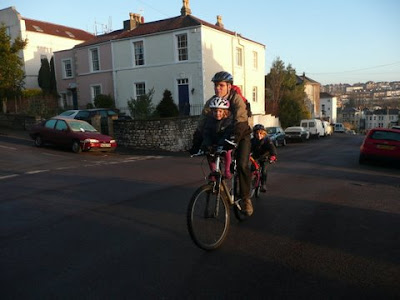 The owner and his small children will now have to walk to school, which will still inconvenience us car-driving parents, especially as such an ex-cyclist is going to be the kind of troublemaker who ends campaigning against cars driving down the pavement.

Hopefully whoever stole the bicycle will realise that child seats are uncool and abandon it, in which case the owner will be grateful for any sightings.