A hint of Dirac

The question "where do they worry about cryogenic fluid transportation processes" was guessed correctly by Chris Hutt: the University. In fact, the Physics, department, the big building at the top of the hill that looks like a castle. An interesting place to visit.

The follow-on question "why do they transport cryogenic fluids" wasn't picked up on, the answer being "a lot of physics experiments use it, often to keep the detectors supercool". We have no data on which specific experiment they were using, though our walkabout did turn up this room with a light on in front of the door, up on the top floor, with the tower in the background. 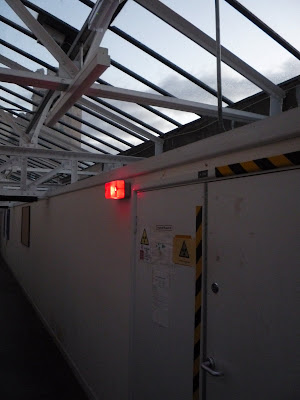 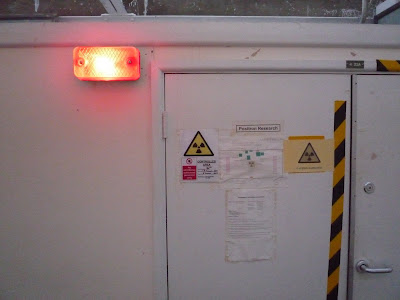 Positrons are the antimatter equivalent of electrons; they have the same mass, but carry a positive charge, and when they come into contact with normal matter they cease to exist in an event that yields more energy/gram than your basic fission or fusion processes (technically that's not true, it's just that in an matter/antimatter event everything ceases to exist, whereas both fission and fusion only use up a small fraction of the fuel.

Looking north from the facility, we see the top of St Michael's Hill, someone standing on some buildings in a hi-viz top, then Redland (church+school), and in the distance the hills of Wales. The two white dots in front of Wales are the peaks of the Second Severn Crossing. 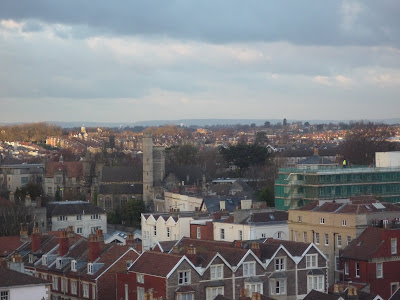 This photo is appropriate, because it looks to where Dirac grew up: Bishopston. He and Higgs both went to Cotham School, which is just to the right the church in the foreground. Paul Dirac got a Nobel Prize for the work that proposed the existence of antimatter; the Dirac equations are apparently quite profound to those people that understand them.

It's amusing that there is a branch of society that chooses to dispute some bits of science because they don't like the results: Evolution and Global Warming being the current conflict points, humanity having moved on from the argument about whether or not the Earth goes round the sun. The Dirac Equations, now their conclusions are quite clearly wrong, how could you have "negative particles" that cannot exist together with normal matter? Yet the unbelievers, be they the US religious right or the Daily Mail, they steer clear of the hard stuff, the stuff that really doesn't make sense, leaving the physicists undisturbed as they ship cryogenic fluid up to the positron experiments.

Nice article and lovely view across the city. (I'm not convinced those are the SSC towers in the distance - studying the full sized image, they look more like the towers of the old Severn Bridge; but I could be wrong).

Yes, I think you are right. The supports come off differently on the 1st one don't they; on the SSC you'd expect to see a set of cables all connecting with the towers, rather than one cable coming off each side of the tower.

Just as Bob said, what a great view.

Includes my house! And some of Bristol's finest trees...

When I was looking at schools for my sons I visited Cotham Grammar School and was distressed to find the "Dirac Room" was a Art Room. At the time CGS seemed pretty weak on the sciences.

@underyourownsteam -Some of us get to visit as we have areas of mutual interest.

@Quercus, some of the finest trees remaining

@The Editor: I don't think that Cotham School is particularly bad for science, it's just a bit of a disappointment for us scientists that a school where two great physicists went to doesn't embrace that heritage. Instead it focuses on performing arts, which is a loss.

The other issue is the tendency for the school's playground and trees to get used up by temporary buildings and parking, but that's a problem for schools in the UK in general.