The RAC: missing the elephant on the room

The RAC. The fourth emergency service. Or is that the AA? Either way, they come out for us, and will park on zig-zags by a pedestrian crossing -below on Muller Road- to handle our breakdowns. But expensive. RAC roadside assistance for two drivers with at home support, recovery and euro-breakdown comes to £283.50. That's a lot. If you are one of those wimps who don't drive a group G road-tax car, it's way more than your road tax. So you need to make a choice, don't you: Tax and MoT or breakdown cover? One you need, one you may be able to get away without, providing the DVLA don't catch you. 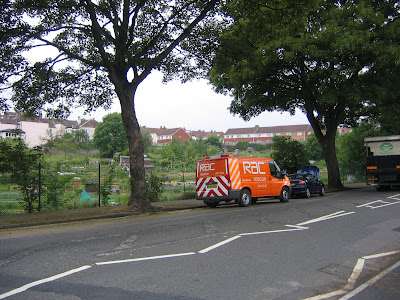 Fortunately, the RAC have seen a solution: abolish road tax.

The RAC has put up a paper on Road Charging, that encourages replacing road tax and fuel tax with pay to use fees.  We initially thought that the BBC had accidentally used the phrase "road tax" to cover vehicle excise duty, and completely ignore the fact that group A vehicles pay nothing, so if you drive a small hybrid car you pay no VED and discounted fuel duty due to its increased economy. But no the RAC, they don't represent the little people. They represent us: the big cars, the white vans, the V8 range rovers coming in to london from oxfordshire. So the RAC used the term "road tax" in their key points, and the BBC radio and web site naively believed the report was somehow independent, rather than a plan to free up money for RAC breakdown cover.

Now, what about the actual report? We like the idea of abolishing fuel duty and road tax, but we think the idea of making people pay-per-mile-driven misses the elephant in the room: pedestrians and cyclists. How can we make them pay-per-mile walked or cycled -and without that, how can they be made to bear a realistic proportion of the congestion they cause? Every pedestrian who uses a zebra crossing or pelican crossing may hold up traffic, and should be charged at least for the lost time of every driver. Similarly, a bicycle pootling along at 15 mph shouldn't just be billed for using the road, they should pay a congestion charges of the row of cars behind which have been forced to also drive at 15 mph.

We don't understand why the article missed this -it's so obvious. They even showed the problem at work in bristol. Go to page 47, look at the photo on the top. That's the zebra crossing on St Michael's Hill, looking down to town. And there are some happy students gaily prancing over the crossing -probably holding up the photography team.

We don't currently have the photo from that exact same location, though we have one from slightly further back on some winter day when drivers were forced to swerve round road closed signs. 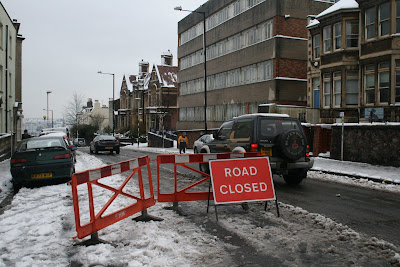 Slightly further down the hill, almost aligned with the zebra crossing, you can see the view of the city that the RAC use in their paper. Yet despite the photo, the RAC miss the elephant in the room, or more precisely, pedestrians in the road. In our way. In the way of the road-taxy payers, or, in the future, road-use-tax payers. 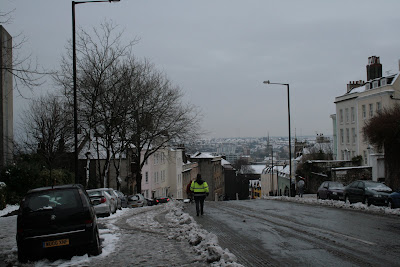 Unless a pay-to-use road system also bills all pedestrians and cyclists for the congestion and pollution they cause, even indirectly, it will be anti-motorist.


There's only one thing about the RAC using photo of our St Michaels Hill in their otherwise missing-the-point article that cheers us up. Every person walking over the zebra crossing from left to right in these photos has had to come from Southwell Street. And what's so special about that? It's the one where the hospital blocked off the pavement to force the pedestrians into the road. But even there, do the pedestrians get billed for holding up BRI hospital cars? We doubt it.
Posted by Bristol Traffic at 07:15

I'm stunned to see no comments on this. Surely taxing all road users the way to go. But so often there are unintended consequences... one trouble might be that if they were charged a proper rate, the tax dodgers might think they had some rights to occupy the road and impede the traffic. We really ought to reconsider that Class G exemption though.