NHS: Protecting people from themselves

Having recently spent some time at the BRI, one of the B.Traffic correspondents was pretty appalled by how all the patients in the respiratory and heart clinics took a fire-alarm evacuation as an opportunity to go outside and have a cigarette. In one way it's poignant: these are why these people are in here, in another, painful. If, under a new government, the NHS needs to make "economies", one way to do so would be to discourage anyone who ends up with breathing or heart problems from smoking.

The same rules would apply to physiotherapy. The bits of the UBHT hospital portfolio that deals with exercise-related injuries up at Hampton House needs to stop people from engaging in physical exercise. Certainly they know the risks themselves: that's why they drive. They also park so as to discourage people from any form of physical exercise, and so stop them becoming patients. But still people walk and cycle past. How to prevent them becoming customers?


Here we see the NHS Facilities Estates at 09:34 on May 5 doing their best to stop anyone cycling by contraflowing the top of Cotham Hill, then stopping so as to block the bike lane. 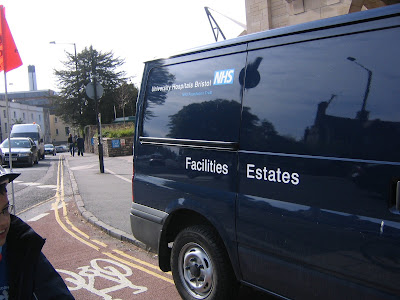 That should have been enough to stop a late-running school-run family from getting down here, for them to realise the error of their ways, return home and drive in, but no, the parent and attached child with a flag coming out their head choose to go on the pavement instead -shamelessly!

From the front, you can see how WR58UMS not only blocks bike access, it tries to stop pedestrian crossings via the dropped kerb, and of passing pedestrians; there not being any gap between it and the staff cars all parked up on the pavement by the double yellow lines. 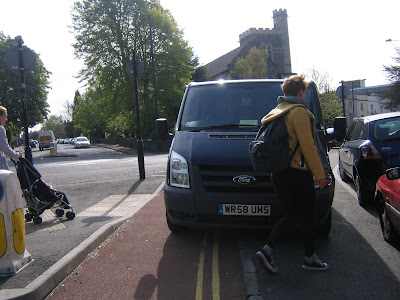 The driver also opened the door to catch anyone trying to sneak past on the bit of the bike contraflow lane which it was not blocking. 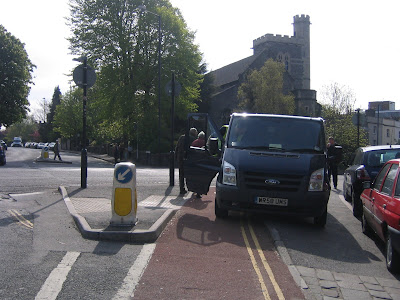 Our reporter also says that the driver warned "if a photo of them appeared on the web site, they would be prosecuted".
In this instance, the driver is sadly mistaken.

Photographs of people taken in a public place are legitimate -and a van driving the wrong way down a one-way street to park across a dropped kerb on double yellow lines is technically in a public place!

There has been some debate about whether the Human Rights Act provides some assumption of privacy, but if a new government repeals that it becomes a non issue. We do not know whether to extend our sympathies to the driver to have their expectations so rudely shattered, or hope that when a "British" version of the human rights act comes in, it will return some assumption of privacy to members of the house of lords, everyone with hereditary titles, or who are important in some other way. Assuming that the notion of "importance" is both relative and transitive, all drivers of motor vehicles would be more important than cyclists or pedestrians, so both would be denied the right to take photographs.
Posted by Bristol Traffic at 06:29