The usual complainers will be whining about vehicles like this van, stopped in the Park Row bike lane. They are misguided 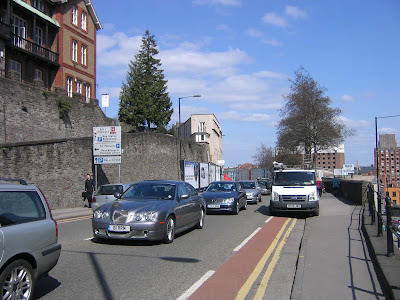 Which would the troublemakers rather have -a van waiting legally in a purely advisory bike lane to make a phone call, or the driver to drive while actually talking on the phone? By pulling over, this driver is in fact being far safer than anyone who drives round talking on a hands free phone, according to the latest research -and way better than anyone trying to text.

Certainly we in the Bristol Traffic Project have had some near misses while trying to post some of our articles from an iphone while driving. Such near misses are unwelcome, as they give the bus company which employs us a bad reputation.
Posted by Bristol Traffic at 07:07

That'll be MF08JWU for the record.