Some people view build outs on bike lanes as inconvenient and dangerous.
On Jamaica Street, for example, the buildout contains a tree, which forces you to be even further out -beyond the designated bike area. 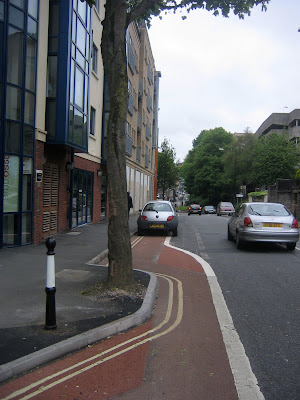 Yet greenery in the city is to be cherished, and by pushing bicycles out of the bike lane, they are out of car door range of the Ford Ka W947MCU 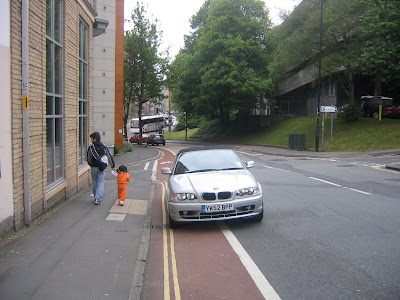 And later on, this BMW YK52BPP, a car that its positioned carefully to stop the small child from running off the dropped kerb and into any bicycle that has swerved back in to lane

The buildout and tree is therefore protecting the pedestrians, the cyclists and the paintwork of the cars.

Update 19-may-2009: Ian W says "Those 2 pictures are on Dighton Street....It's becomes Jamaica Street at Kings Square." Thank you!
Posted by Bristol Traffic at 06:58