Very Direct to you Cleaning Services on Nugent Hill direct

Since the island went in at the bottom of Nugent hill, we have had no submissions of photos of any cars driving the wrong way down the one-way section. Since we were getting one a week and the island has been up for four weeks, that was quite an improvement. Has it stopped cars trying to avoid Cotham Brow and most of the Arley Hill traffic jam? Yes -most cars.
But not, apparently, "Direct to you Cleaning Services", and their van VA06DDN 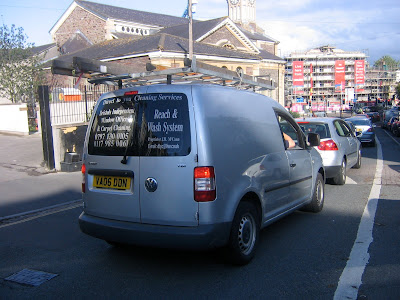 This is the first vehicle encountered doing the contraflow with the island in place. Interestingly, it does make it harder to pull out, because cars in the Arley Hill traffic jam can ignore you more easily -the contraflowing vehicle can't edge out and force its way in to the line of traffic. Now it has to rely on a vehicle coming down the hill to be generous. 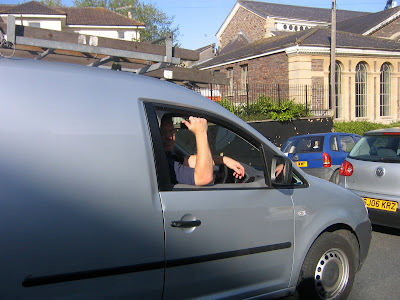 If we have a reduction of one vehicle report every four weeks compared with one a week, that's a reasonable success, possibly a 25% reduction in the number of cars or vans completely ignoring no entry signs in this stretch of road. Progress!
Oddly enough, the driver of this vehicle, was not at all excited to be the first person to enter our database for this action since the road was changed. After congratulating him, instead of him saying "Thank you", he said "Fuck off and get a life". Which is a shame, as he has shown such dedication to shaving 30s off his journey that he really needs to be recognised, and he should be proud of the recognition.

We shall forward his photograph to the local PACT group in order for him to be more formally recognised.
Posted by Bristol Traffic at 07:04

I saw a BMW driver do this just 2 weeks ago, I was amazed he managed it to be honest. Since they did the work further down Stokes Croft, I haven't seen the gargantuan waits down Arley Hill once even at rush hour, so there really is no need...

-Grab a photo. Having infiltrated the local Police And Community Together group, we have the email address to send these so they get a warning letter from the police -and if they are seen more than once, a fine.

I do admire the photographers bravery in uploading the image of the driver without obtaining his consent (presumably).

At least from the constabularys point of few they'll get one prosicution!

In the position he was in, he was committed to going onto Cheltenham road: no easy way to turn round and find a bicycle going up to kingsdown without looping all the way round to the arches and Cotham Brow.