I owned a Dodge minivan for a year. That was in the US, at a time when fuel was $1.60/U.S. Gallon, about 30p/Litre, so with a vehicle that did 27 mpg long-haul, was much cheaper than running a small car was or is in the UK. 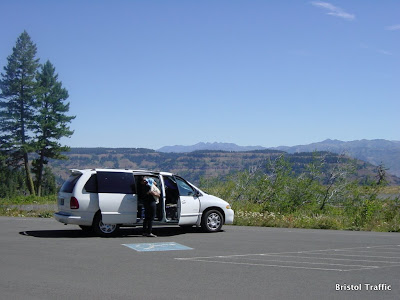 It was convenient for those long journeys. Automatic 4 speed engine, cruise control, oodles of luggage room in the vast back. And in a country with big drive-in/reverse-out parking bays everywhere, the fact there was no rear window visibility was fairly unimportant.

However, I don't miss it, and I am not surprised by Chrysler's departure.
One of the weird things about it was that one of its "features" was, apparently, the ability to detect you'd been driving for 10 minutes with the indicator on, and apparently the car would beep loudly to tell you this. This says a lot about their target market: people who drive round with the indicator on.

Even in the US, this vehicle sucked. Which is why Chrysler have filed for Chapter 11 Bankrupcy today. Their target market abandoned the minivan the myth of the SUV, the belief that you were safer in a prone-to-flipping 4x4 truck-like monster, and then, come the 2007-2008 oil and financial problems, stopped buying cars altogether. Oops.

Some people think this site is anti-car, and that we don't like car drivers. That's up to the individual contributors,. When I see someone driving a Dodge/Chrysler minivan round Bristol, I don't just think "oh look, these people are bravely trying to fit a vehicle designed for US suburbs around a city and streets that is way out of its design specification." No, I feel sorry for them. Because they have to drive round in a Dodge Caravan.

[Photo: Hell's Canyon, between Oregon and Idaho]
Posted by SteveL at 18:28