A reader "S" writes in with some breaking news

"do you do road rage coverage?"

Yes, but we'd rather things were peaceful out there.
they continue

I was chased by a van through Montpelier today, I had to hide in someone's house to get away.

I have a photo of the van

In that case, your contribution is welcome.

I was cycling up Stokes Croft, waiting to do a right turn onto Ashley Road. We had a green light but there was two lanes of cars heading in to town, so I just stayed where I was -in the right hand lane waiting. Suddenly this van that was waiting behind me swings left and then goes in front of me, almost turning on top of me. This is not only dangerous, as there is still two lines of traffic, pointless. I go forward, shout "what the fuck are you doing", get in front of him, and then, when there is a gap, cross the road. I then turn off onto Picton street and carry on. Before I do that I look back, and there is the driver of the van swearing and shouting at me. I carry on.

As I get to the end of Picton Street, past where the famous Range-Rovers live, I look right down the road to Herbert's Bakery (ed: Wellington Ave) and what do I see? I see the van coming up the road. The driver of the van was now chasing me into Montpelier. That gave me a fright. I was wondering if I should turn round and use the shortcut to Richmond Avenue to avoid the van, when I saw someone I knew getting their bike out of their house. I ran up to them and tucked my bike inside.

The can driver stopped, got out the van and was screaming at us "not so brave now, all words, come on then!" -he really did want a fight. But I don't understand why. All I know is that I was waiting at the lights to turn, he swung round and over me, and when I got upset at that he chased me round Montpelier.

We said we were calling the police and waited inside, then, as he got back in and started to drive out, I grabbed a photo. 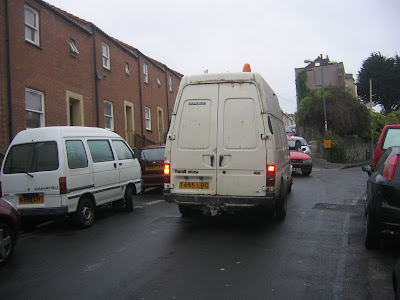 Here is a photo of the van (ed: T455LBO) -it had Roman Windows written on the side.

This was very frightening. My journey only has one bad bit -Jamaica Street and Stokes Croft- and then I'm the safe quarter of Montpelier. I was good to pedestrians and didnt cycle through the pestrian crossing period, instead I waited patiently. And this is my reward -a mad white van driver chasing me through Montpelier.

Our local contacts reassure us that David who runs Roman Windows on Stokes Croft is really nice, and they checked this out. The vehicle is actually being borrowed by A&M motors this morning. So this incident must be because one of their drivers is having a bad morning or something, going off the deep end. Possibly they felt that you weren't waiting patiently for a green light, but instead blocking them, so while you were happily waiting, they were getting more and more worked up -so when you pulled past them and asked them WTF they were doing, they finally exploded. That doesn't excuse his actions, only gives us a possible explanation.

We can understand why this scared you, it must have given you a fright to see the van coming after you instead of going on to wherever it was going. In situations like that it is good to have a good "exit strategy" -you were lucky you know people in Monty. Otherwise, any bike-only option is good, as is doing a full U-turn on the road and heading off in a random direction. This can leave you with a new problem: how to get where you are going when there is a chance that somebody mad is after you.

The thing to remember though, is there are people like that. If someone does something aggressive like overtake you while you are waiting to turn right -it may be easiest to let them. Take a photo (discreetly), think of something witty to say, send it in. Rather than escalate the situation, which is exactly what you ended up doing, sadly.

Returning to the van in question, it's being driven dangerously by someone from A&M motors, known for their war-on-trees in St Werburgh's. We shall chase this up.
Posted by Bristol Traffic at 11:25

Welcome to Cycling City. For all the millions lined up to fill consultants' pockets nothing is being done about the harassment, intimidation and aggression we have to confront every day.

Ahh, Montpelier, a great place to be threatened for cycling, and mostly because of the hills.

York Road and Richmond Road are perfect for being hooted at as you cycle up them - no passing places for cars (due to parked cars). Much like many of the roads in Bishopston.

I like part of the Alpine Skiing Code in these situations..

"People ahead of you have right of way - it is your responsibility to avoid them."

(This simple rule is probably also in the Highway Code, but is far to difficult to find).

Must be something in the air. I got screeched at yesterday when I had the temerity to overtake a slow car on my bike... o well, she was smaller than me anyway :-)