For anyone wondering why the Avon and Somerset Police Helicopter was doing the rounds of Purdown and Stoke Park at 17:40, this is the reason. A motorbike lying on its side on the secret road that UWE students park on, the one with three footpaths running off -to Stoke Park behind the bike, UWE on the left, and Lockleaze behind the camera. 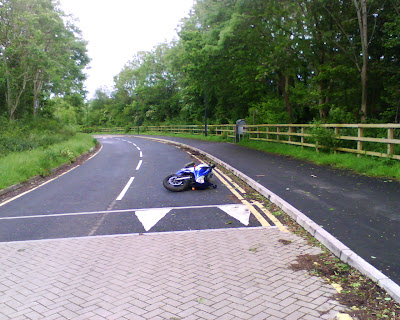 The police didn't quite know the area, so they were very grateful of a donation of a 2008 Bristol Bicycle map, which shows these paths. The ground forces were cornering bikes coming off the different paths and asking if they'd seen anyone, and before long the 'copter was overhead, scanning the woods. The kids at the Lockleaze play area were amused by this story -presumably this wasn't one of that lot, who all know well that you need better tyres to take a moto cross-country towards Purdown, especially after the last couple of day's rain.

Posted by Bristol Traffic at 19:09