Before the war on motorists began: Splatts Abbey Wood

This is a before and after map series, full details of why to crop up later in the week.
First, the North Fringe, 1987. Congestion on the A4174, running through the middle of the photo: minimal. The roundabout centres on gridref ST6135787, apparently with trees on it. To south, a large blank space -the remains of some quarry or something. Crossing it, three power lines, one phone line, and a footpath from the sports grounds in the left side to some fields just E. of Splatts Abbey Wood, then roughly north. All of the area was under the control of Avon County Council; there are still some signs up in the area if you know where to look. In the S.E corner, just S. of Bonnington Walk, Sta (dis) remembers the existence of some station? Lockleaze Station? (no: Horfield Railway Station)
What is clear is this: No congestion on the ring road. No cycle lanes from the sports grounds to the ring road. Less traffic lights in the city. Not a coincidence. 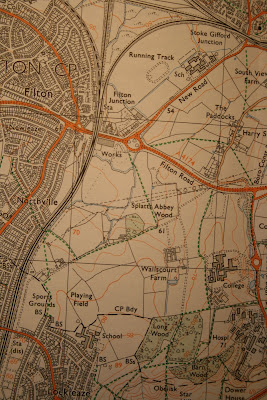 Now, map two, printed in 1997, in the time the socialists were in power, and things were bleak. 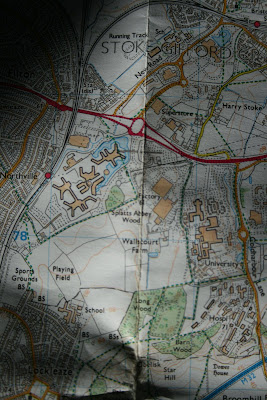 The A4174 roundabout has moved to ST61607880, though not with the trees. South of it, the wasteland for motorbikers is now MoD abbey wood, with a moat on the NE side to eliminate the risk of anyone driving a truck full of explosives in, parking to the east and south-west and positioned to reduce the damage caused by anyone getting a car/truck full of explosives in there and blowing it up. Although the NI peace process was making progress, the tendency of the Provisional IRA to mark some kind of stalemate by blowing up prestigious targets on the mainland meant that these things were considered important. The disused station has been supplemented by the Abbey Wood railway station, which apparently has direct connections with Wales. The former Filton Junction station, north of the A4174, is now marked as Sta (dis) to indicate its new state.

South of the MoD facility, just north of where the Tailspin housing estate is still being built, a bike path. And what else has changed? Congestion. Is it any coincidence that there are traffic jams on the A4174 now that a bike path connects Lockleaze with the ring road, and that the new roundabout and the one by the M32 have traffic lights? We think not.
The final item of this note is the rights of way, the footpaths. These two maps imply that there was never any right to cycle through the rugby grounds, even the footpath doesn't go direct from Bonnington walk, but instead via Landseer Avenue. And here's the best bit: the right of way finishes by going through the MoD moat, through some of the building, and out the other side. We think pedestrians wanting to walk from Lockleaze to Sainsbury's should be made to walk this route, as it will reduce the number of them pressing the cross button on the pelican lights at the ring road.
Posted by Bristol Traffic at 19:55

A railway-history pedant writes: Filton Jn station also had direct trains to Wales; what it didn't have were services to Bristol Parkway and Gloucester, and the connections to London and Birmingham that come with that.