Although we are clearly in the cars-not-students-on-bikes camp w.r.t the Abbey Wood and UWE bike paths, we are worried that those people trying to exercise their legal right to drive along the abbey wood path are entering dangerous ground.
You see this cyclist who is walking on the UWE path while holding a phone up to their ear? If they were a student then yes, sounding your horn as you clipped them with your wing mirror on a bike path to which you had inherited ancient access rights would be the right thing to do. But he's not in student clothes is he? 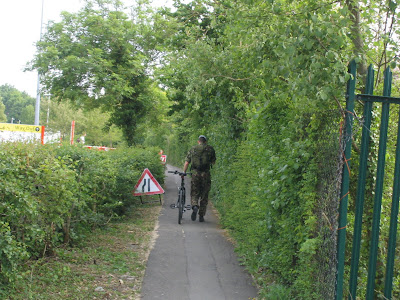 He's in full army uniform with cap and camouflaged rucksack, and that probably means he's spending a few months at abbey wood in between some posting in Iraq or Afghanistan -places where any perceived threat to the foot patrols is met by a fairly aggressive response.
Cut someone like this up in your car and he's going to use that phone to call in air support to deal with your mondeo, and as we are only 10 seconds flight from BAe Filton, a dispersal site for the UK airborne nuclear weapons fleet in the cuban missile crisis, that response could be pretty destructive.
We urge whoever it is who claims historical right to drive down the Abbey Wood bike lanes to show some sanity here, to show some restraint. The alternative is worse.
Posted by Bristol Traffic at 07:22