The Once and Future Bearpit

We've been getting more traffic recently, some from people who again, fall for the malicious lie that we are some kind of satire. The photographs are all genuine, the commentary pretty much lifted from Bristol Evening Post comments sections as is. Not fiction. The reason we are critical of cyclists is not just because of our affiliation with the Daily Mail group, but because ofcom requires it as part of their balance-in-reporting scheme. Every time someone in the Guardian or Independent pens a short article praising walking or cycling, Bristol Traffic or BBC local news is required to produce an in depth posting or TV/radio broadcast showing the truth.

The other source of recent traffic is people searching for "Bear Pit Bristol" or "Bristol Bearpit", for which of course we are one of the highest ranking results. Why so many visitors? A sudden urge to spend a quiet hour enjoying the peace of this urban idyll between buses? No: the Stokes Croft Street Fest. Our reporter "quercus" descended into the pit itself, for a bit of giant chess while listening to the bands -none of whose music is yet available on ABD-approved driving CDs.

Some people may denounce us for encouraging some kind of people-walking-around event, but they miss the point. Any event which celebrates Stokes Croft brings customers to Ritas and Stix takeaways, so benefiting us all.

But it's more profound that that. These people, by making the bearpit a place to visit, have reintroduced a whole new generation to the original bearpit goals: a roundabout for the whole family to enjoy!

We've been a bit critical in the past of people who talk about attractive pedestrian walkways, underpasses, and roundabouts people to visit, but that's because today's uses of the Bearpit, Lawrence Hill roundabout and other inner city parkland areas haven't lived up to the vision. 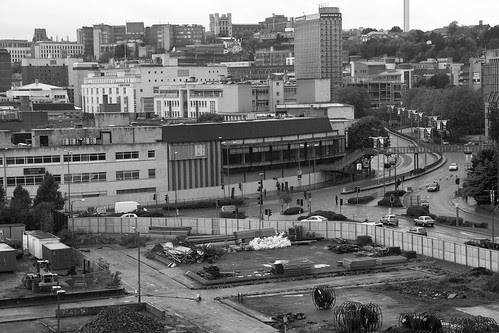 Remember the mid 1970s, when the M32 Parkway was open? Dad could drive down from Filton, park the beige Austin Allegro at Castle Park -when it was proper parking, not this green stuff, put his driving cap and gloves in the glove compartment -that's what it was for- and you could go into Broadmead to stare in wonder at the shops. Yet mum and dad would keep you away from the centre of the 'mead, and go back to the shops they saw at the end of the M32. Mum and the kids would go into Allied Carpets to see if any new plush green nylon rugs had come in, dad would go to the sex shop a bit further down to get one of his magazines. And where would the family meet up afterwards? That's right: The bearpit!

We could get together, eat and drink our wimpy takeaways, dad would flick through his purchase in its paper bag, mum look at the carpet brochures. Everyone would gather there, the giant-chess game had a queue of people waiting to play, whole families would have picnics.

What killed it? Progress. The Broadmead planners took Allied Carpets away. The Internet took the sex magazine shop customers away. The chess pieces vanished one by one. The Austin Allegro vanished; the Austin Metro and Morris Ital never gained quite the same cachet. Bristol City Council turned Castle Park into green space, and started charging too much to park in the Galleries car park. Opec and central government made the journey down the M32 costly. This is why the bearpit died: it became too hard, too expensive to pop down from Filton for a quick hour in the bearpit, especially once the important shops were gone. Nothing has brought them back.

This is why we celebrate the Stokes Croft Streetfest, why we got the Allegro out for a special trip back into town!


The Bearpit is Dead! Long Live the Bearpit!
Posted by Bristol Traffic at 07:25

Not just the Bear Pit, though.

I have to admit remembering with fondness the old Co-Op department store, with it's funny escalators, overlooking Castle Park.

And the clever cycle parking in the car park below - where the Galleries (sorry, Mall) is now. It was called a lamp-post, and in the days before D-locks you could attach a bike securely to it using a length of chain and a padlock. Of course, gangs of itinerant thieves would occasionally pass through Bristol with bolt cutters and a brilliant modus operandi. They'd walk past the bike, cut the chain, and keep on walking. Then return twenty minutes later in a truck and chuck the newly liberated bike into the back and make off back up the M32 Parkway. Worked a treat.

No Cycling City rubbish back then.

Even if you told a Policeman with a pointy hat (yes they used to have those too), in Broadmead that you'd seen the chain cut they'd look at you suspiciously and say 'OK son, I'll keep an eye on that', and then walk off in the other direction.

Not all has been lost to cycling and pedestrians, though, as at least we now have a nice car park overlooking Castle Park (not like in Edinburgh where they have shops one side and park the other). Of course there's also a really nice new one at the bottom of the M32 Parkway, too.

I sometimes drive to the Galleries Car Park, and have a picnic on the roof.