Nugent Hill is a regular on this site, as cars running the contraflow are part of the evening entertaiment. But not for long. 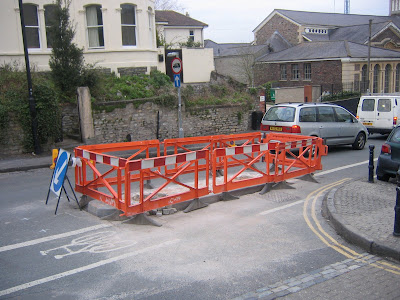 At the bottom of the contraflow, where the hill joins Arley Hill, a new island is going up which is positioned precisely to stop cars turning right. 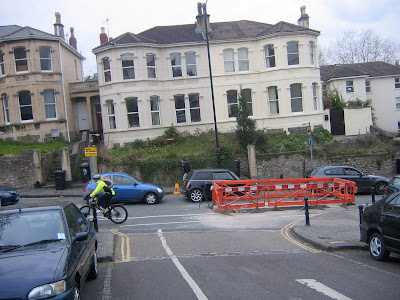 It also provides space for bikes using their contraflow lane to go up, forcing oncoming cars to get to the proper side of the road. Progress. 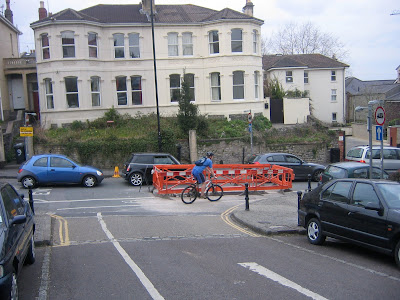 There's only a couple of concerns here in Bristol Traffic, semi-official docuementary of our streets
1. Why are there no warning signs telling cars about to run the Nugent Hill one-way stretch that they can't turn right at the bottom?
2. What's going to happen when downhill bikes are forced into exactly the same narrow lane that the uphill bikes are using? In the space of a few minutes observation, one of the two downhilling bikes chose that option.
We propose that the traffic island gets a dropped kerb for downhilling bikes, and the space for a lit sign on the downhill side filled in, letting the DH bikes take the corner at speed, pop up the dropped kerb and the jump off into the gap between cars in their traffic jam and bikes going uphill. This would make it fun and reduce the risk of head-on collisions.
Posted by Bristol Traffic at 07:25

I will check that someone in "Traffic" has noted (and perhaps even acted on!) your wise suggestions.