Rebel with a cause

Being a celebrity gives you power. Your statements get press, your picture gets recognised worldwide. This is why so many celebrities take up the global pressing campaigns once they become known. Bono: poverty. Sharon Stone: middle east peace. Richard Gere: war.
What about Bristol. Well, we have one problem (ignoring the collapse of the financial system, the running out of north sea oil and other national issues). That problem is traffic: the congestion, the impact of the life of the locals, the impact it has on life in and near the city. Which is why we are so greatful that Carol Vorderman, Bristol's local celebrity, has come out against resident parking.
It must have been a tough choice. There are so many issues in the world. A skilled mathematical celebrity could have gone on air to explain how quantitive easing helped Japan recover from the lost decade, how that the conventional armaments of central government to trigger economic activity -lowering interest rates and cutting taxes- had failed, and that desperate measures were needed. Or she could have explained how uncontrolled population growth was the root cause behind so many problems, from peak oil to deforestation, and that unless we did something there there was bad news ahead. But no, Carol stayed true to the city, looked at what matters here, and came out against resident parking.
Because the right to park your car badly wherever you can get it close to a clifton coffee shop is one of the great freedoms of the city. More than, that -it is what makes Britain so British. The government may be tracking all car movements, wanting to tap into every entry you make in facebook, or detain people it doesn't like without any need for a trial. As long as the core freedoms of the island are retained -and parking wherever you like is one of them- Britain will stay free.
That doesn't mean that people can ignore rules willy-nilly. Below, is a picture of a small child cycling along a path in the downs that bans cycling. That is not British. There are no cycling signs that have been there for many decades, and they should be respected. We are talking about parking, which is a right. 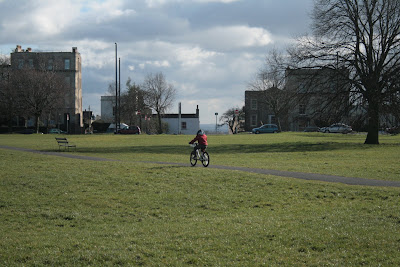 Ever since the Romans built the country's first real roads, important people in big vehicles have been parking where they like -and the little people on the roadside have complaining about the experience. They didn't respect their Roman masters then -they don't respect their tier-2 celebrities today, and how much such people benefits the city. Without people like Carol Vorderman to speak up for us on ITV2 daytime TV talk shows, nobody would know anything of our city other than it is near where the M5 clogs up on your drive to the South West.

We in Bristol Traffic welcome Carol's involvement in this issue and are glad that she has correctly recognised what the true issues are. In order to recognise her contribution, we would welcome any photographs of Carol parking n Bristol. We are also considering the possibility of campaigning for a directly elected mayor for this city, with Carol Vorderman being the official Bristol Traffic candidate for the post. She has the vision this city needs!
Posted by Bristol Traffic at 07:07

As stated in the Evening Post article Carol Vorderman lives in Clapton-in-Gordano, meaning that until the RPZ is extended to the driveways of houses in small North Somerset villages it will have no direct impact on her.

I'd also like to see some proof of her claim to have "lived in most cities." If anyone should know just how statistically improbable this is, it's Carol Vorderman.