There is a new activist group forming/reforming to push for pedestrian rights in the city, Living Streets

Hi, we are mailing you as you are listed as a supporter of Living Streets in the Bristol Area.
We are going to rebuild the group in Bristol: this is much needed. Transport dominates the agenda locally and all forms of transport except walking seem to have strong lobbyists.
* The bus network is receiving long term attention and investment through the 'Greater Bristol Bus Network'
* FOSBR and others have successfully won improvements to local rail
* Cyclists are no longer just a 'loud and articulate minority', but an organised and highly effective loud and articulate minority, who have won millions of funding through cycling city
* Even the ludicrous 'Association of British Drivers' has a regular media presence
Who is speaking out locally for pedestrians? No-one, well not in a co-ordinated way.
This is odd, given that we are all pedestrians to some extent. We can see with our own eyes and through blogs like Bristol Traffic, Southville Parking, On the Level and Green Bristol blog that pedestrians are increasingly marginalised.
Current issues include:
· There are unacceptable delays to pedestrians using the light controlled crossings at the new road arrangements at Bond St and Cabot Circus.
· Changes are planned to Blackboy Hill which will include replacing zebra crossings with light controlled ones, to favour traffic and delay pedestrians.
· Pavements are blocked by vehicles in the inner city for days on end as the owners know there is no enforcement.
We think it will be relatively easy to get a better deal for pedestrians and are asking you if you want to help. The door is part open: the new transport executive Jon Rogers states that they will be improving enforcement of parking regulations, supports 20mph limits in the city and is committed to an open style of government. We will not only keep him to these promises but ensure pedestrians are properly represented in all road proposals.

This is an interesting idea, though sadly inconvenient for the rest of us. Take, for example, these roadworks on Cotham Brow, primary foot route from Gloucester Road to the university and Clifton. The pavement is closed for roadworks, pedestrians expected to cross the road. 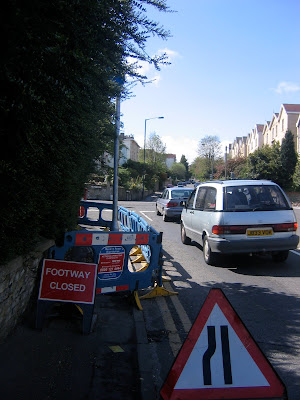 Where another set of roadworks ensure that there is no safe route on that side either. 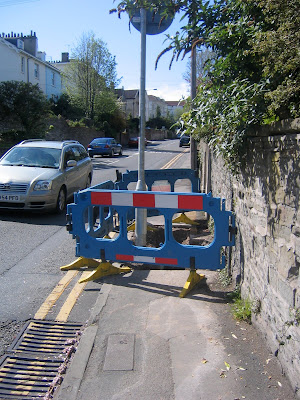 This level of anti-pedestrian activity is not an accident -it is done this way to ensure that no cars are held up. If this Living Streets group had their way, these roadworks would have required the road to be shut down, returning it the quiet and peaceful lane it was last summer -and so preventing anyone from commuting through this route. Commuters bring money into the city! Shoppers spend cash in the city! Pedestrians take up valuable space that can not only be used to park cars, it can be used to house mobile phone masts and electricity substations. These are effective uses of pavements. Not this walking thing.

The plan
At the moment we want only an expression of interest - ' yes, count me in'. Please respond to this e-mail if you’d like to be kept informed about the activities of Living Streets’ Bristol branch.

We will have the minimum of bureaucracy and will not flood you with emails, promise.
Please let us have your comments on what the problems are where you live, and ideas for tackling them. In two weeks we will mail all those interested with a summary and an invitation to draw up a strategy.

You can find the national Living Streets strategy here

We look forward to hearing from you!

So there you have it. Either a militant pedestrian group to push for pedestrian rights, allies with Association of British Drivers in the war against bicycles, or an attempt by the cycling campaigners to create a mock dissent group, like an Eastern Bloc trades union group. At this point in time, it's to early to tell which.
Posted by Bristol Traffic at 11:44