Over the last month, two Cycling Chic blogs have appeared

Both are, sadly, flawed -if their ambition is to be as popular as Copenhagen Cycle Chic.
Copenhagen chic is the incredibly popular web site showing photos of Danish women cycling round their city in their fur suits and boots or high heeled shoes -it is now one of the most popular European city cycling advocacy sites. Or is it? Because the main driver of web traffic is not the bicycles, it is the tall, blonde beautiful scandinavian women on them. A web site showing the same women pushing shopping trolleys round the city "Copenhagen shopping trolley chic" would be equally popular. A nokia-backed mobile phone service delivering a photo a day of Finnish women using the latest nokia phones on their daily Helsinki travels would sell better than their music subscription service. It is not about the bikes, its the women. Which is fine for many of us -although it is unfair that there is not a sibling site showing all the danish men on their bikes.

Now, why does Copenhagen Chic show the women in fur coats and the like? Because they are practical in that city. Copenhagen is one of the North sea cities -like Amsterdam it is flat, and in winter dry but bitingly cold.

Compare with Bristol. We have wetter weather, can do with being seen by car traffic, and the people just aren't as pretty. Sad but true. In our city, we also get rain all too often. A waterproof and visible top is very practical -and not just for cycling. It is good when walking round town, as are a nice pair of gore-tex hiking boots. That is Bristol Cycling Chic: a phrase we first used, and lay claim to. We just don't normally photograph people cycling around in the rain because it gets the camera wet, and we don't normally photograph people cycling around as they are ugly and it isn't that funny. But if needs we, we can adapt.

Here then, is someone cycling through a red light on Cheltenham Road at 17:44 on April 21. They need that high-viz top as they are picking their way through gaps in the traffic of cars coming off Arley Hill. 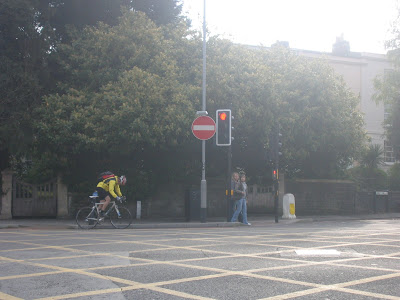 Similarly, when the Bath Buildings road gets the green light, that traffic has to deal with the next person running their red lights, here wearing a fairly grubby pullover that will look the same after a few more months of use. They are both wearing a helmet, because that may save your life if a car pulling out of either of these junctions were to hit the cyclist. 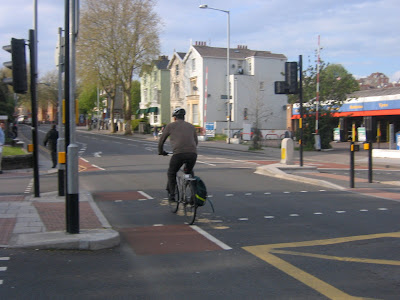 One more bit of cycle chic, here in Bath Buildings, watching all of this. 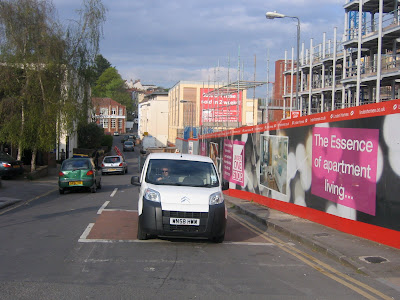 White van WN58HWW has pulled entirely into the bike ASL lane while the light was red, and is sitting their watching these bikes with amusement. But a mellow look on his face and fairly cool pair of sunglasses. He didn't try to run the lights. And for all those Bristol Cycling Chic bikes running the red lights, the fact that this van is in the ASL is unimportant -if you don't stop, you don't need and Advanced Stop Line.
Posted by Bristol Traffic at 21:29

Hmmmm. Have to comment on this one I'm afraid. Why are you so dismissive of the idea of normally dressed people cycling around? Surely anything that promotes cycling to a wider demographic is a positive move? Goretex, hiking boots and hi-vis puts alot of people off cycling, particularly the hi-vis as it makes cycling seem more dangerous than it is. By encouraging more people out cycling, regardless of how they dress or what bike they ride, critical mass will be achieved all the more sooner!

I have to agree with RufusR. If you want cycling advocacy then Mikael Colville-Andersen's other blog "Copenhagenize" is the one for you. The "Cycle Chic" blog is deliberately more light hearted, but with a serious message. Copenhageners regard their bikes much the same as the rest of us regard our shoes - just a useful means of getting around. No need for fancy cycling gear. The weather and hills issues are red herrings. Plenty of pictures of Copenhageners in the rain. Also a fair few of men on bikes, too.

The one thing that Copenhagen has that Bristol hasn't, of course, is that they have a city council that understands cycling, genuinely wants more people to cycle and actively promotes cycling by making the streets bike friendly by whatever means is necessary. Our ruling clique basically doesn't understand, doesn't really WANT to understand, either.

Quite a drole read, this. You've nicked our Cycle Chic name, but you haven't understood the message.

Firstly, if you'd happened to visit the blog more than once, you'd have noticed men in the photos. Half our readers are women, so we cover our bases.

The blog is a streetstyle blog, with bicycles. Not a bicycle blog with fashion. Shame you hadn't noticed.

And like he said, Cycle Chic merely hammers home the fact that real bicycle cultures are bike geek-free zones. We don't have cyclists in Copenhagen. We merely have people who happen to get around by bikes.

Again, if you'd done your research, you'd have picked up on the fact that our Copenhagen blog is merely an extension of a Danish cultural tradition. Since the birth of the safety bicycle this very Danish icon - 'the cycling girl' - has featured prominently on posters for bike brands, in songs, poems, literature and film for more than a century.

In towns where bike nerds rule, regular people will hardly be encouraged to cycle, as they used to do in great numbers.

Your animosity towards cycling as a feasible, effective and sustainable transport form for the masses is odd, counterproductive and quite useless.

And your fetish for hi-viz and other gear is odd and by promoting it you are merely stunting the growth of bicycle culture. Where are your photos of pedestrians in hi-viz or your calls for them to wear these things?

Fortunately things are changing around the world. In Ireland's new national cycle policy, they include these words: "There must be a clear message that cycling is a readily accessible form of transport, not requiring unnecessary encumbrances such as specialised cycling attire."

Is this site advocating cycling? No, it is providing commentary for the purposes of entertainment.

As for the high-vis -given that one of the subjects photographed was riding across traffic with a green light, I think it could be needed.

Hopefully, those returning to cycling will not do that, in which case they don't need them. But if the people running the lights are doing it as a substitute for fitness, and if everyone else on Gloucester road sets a bad example, I fear the worse.

@Mikhail. I do not know about the other contributors, but I do subscribe to Copenhagen Chic, as well as Copenhagenize and Amsterdamize. I cherish not only the sight of Danish women (and some men) cycling round the lovely city, but the superb quality of the photographs themselves, which put those of myself and most other contributors to shame.

I am therefore very pleased that you have decided to visit our commentary on what it is like to cycle, walk and drive round Bristol. Or even to wait for the bus that isn't going to turn up and would only overcharge you if it did.

Your animosity towards cycling as a feasible, effective and sustainable transport form for the masses is odd, counterproductive and quite useless.We hope so, we really do. We are pleased to live in Britain's first official "cycling city", and watch the expenditure of our new government funding with anticipation. Only this week, for example, has it been confirmed that the
Prince Street Bridge Improvements are going to make it easier to
run buses over a narrow city bridge.. With £44K of our cycle-city funding going to make it easier for buses, we look forward to the rest with glee.

And your fetish for hi-viz and other gear is odd and by promoting it you are merely stunting the growth of bicycle culture.If you look at our other cycle chic postings, you should note that we are generally making fun of their cycling decisions. You have to also consider what percentage of clothing worn by residents is in fact ex-sport: rugby and polo shirts, trainers, football shirts bearing the names of failed banks, running shoes. We hope that some more cycling friendly clothes go mainstream, by which we do not mean fancy and overpriced Rapha tops, merely things you can walk or cycle around in all day without getting too wet in, stuff with pockets.

Where are your photos of pedestrians in hi-viz or your calls for them to wear these things?Ah, now that is an interesting question. I shall pay a visit to my local running shop, the one with a "keep parking free" sign and the illegally parked van outside, and look at its collection of hi-viz clothes to stop runners getting hit by cars. You may also like to note that we have advocated cars knocking down slow pedestrians to save on health care costs and in

our coverage of Oregon's $27/year bicycle tax, we not only came out in support of that, we advocate registration and tax for all pedestrians. They not only take up space, they consume oxygen which could otherwise be used in high-performance car engines. Incidentally, some people from the US took that posting seriously.

Please keep an eye on our blog to gain the overall flavour of our non-libellous praise for incompetent car drivers, car parking and other activities within the city. Or contact us direct via bristol.traffic at gmail dot com for more details.

[Covering mouth to stop other office denizens asking what is so amusing ...]

Bristol's full of stylish normal people on nice bikes. Maybe harder to snap than in Copenhagen but search Bristol Cycle Chic on Flickr and you'll find some. If people are going to try to emulate the Copenhagen Cyle Chic and Amsterdamize sites at least post some decent photos

There's loads of stylish people on nice bikes in Bristol. Maybe not as easy to snap them as in Copenhagen but they're out there. Search Bristol Cycle Chic on Flickr for a few. There is a growing cycle culture here and it's good to show the world, but if people are going to emulate sites like Copenhagen Cycle Chic and Amsterdamize then at least stick some decent photos on them!

I think we're getting toward the tipping point here in Bristol - it's definitely becoming easier to blend in about the place amongst the hoards who still feel the need to be cocooned in lycra or hi-vis or god forbid - both... Although I respect other people's decision to wear what they want - I totally understand that there are those that actually commute quite a distance into the city every day. What I can't understand however, is why people who live closer to town than me (and I see them joining the railway path) need to be in lycra leggings hi-vis jackets et al. They must have to change when they get to work - and I guess the only reason they have to do that is because they tear off down the path at close to 30mph...

I've often wondered how much time people save/spend by having a shower when they get to work vs. traveling a little bit slower and not having to get sweaty in the first place - does anyone know if any research has been done into this/have the time to worry about such things?!