If you look on Bristol Streets, people have a lot to say about cycling along Gloucester Road. That could be a measure of its popularity - a lot of people cyle down it. It's flat, has bus lanes to ride in in peak hours, and has lots of shops.

Parking for bikes has been a bit patchy though; three stands by the Prince of Wales pub, stands so close to the wall they were useless. Looks like some more are going up on the wider start of the street. Two new ones next to two existing stands 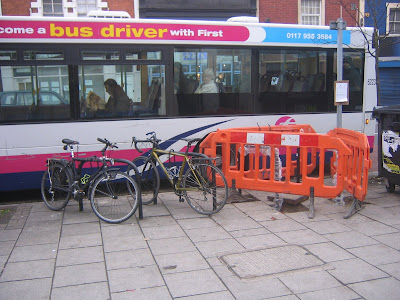 And four more outside Pembury cycles. 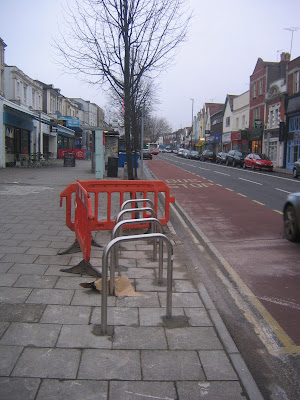 Admittedly, the ever-popular bread store and various pubs -Prince of W, Hobgoblin- are on the other side of the road, but that is a very narrow road; this side has room for the bikes and now, bike parking.
Posted by Bristol Traffic at 07:00

And now there are loads more all the way up to just before "The Flyer". Am I dreaming this?