﻿There was a lot of press this week on the fact that Sunday Nov 9 was the 70th anniversary of Kristallnacht, the beginning of the Nazi round up of anyone who couldn't show non-Jewish ancestry and, for many of them, their death. But it was also the 19th Anniversary of the fall of the Berlin Wall, which is something to remember and celebrate, even while the crimes of Kristallnacht are remembered and its victims mourned.

Here is the Brandenburg Tor, the pivot-point of east/west conflicts since the time of Napoleon -the Napoleon who took the horse statues with him when he passed through, and which the Prussians took back after fighting with Wellington at Waterloo. Later, the brownshirts and the blackshirts came and marched to their songs. After the bombings, after the liberation and then occupation of the city, this is where east and west were divided, and where the Berlin wall came up: the official representation of the Iron Curtain. 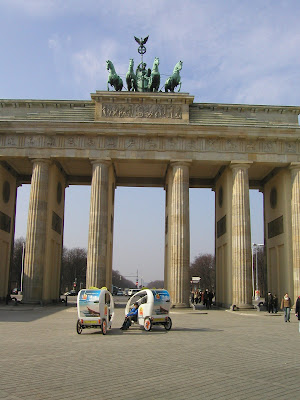 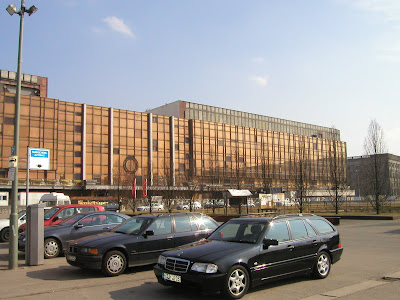 That is parking to celebrate.
Posted by SteveL at 14:06

There was a fair bit going on here as well, mostly about Kristallnacht.

Thanks for a presenting such a positive view of Germany as it is now.