Cumberland road is closed -emergency repairs to keep it out the river. Good thing this happens before BRT routes go in on top of it.

We are fortunate here to have an ever-growing set of correspondents, and are grateful for some pics from "Q" of the consequences.


﻿I've been vastly amused (I work down there) at the number of vehicles that have ignored the road closed signs, driven half way along it, and then had to turn around because it really was closed. Not a problem on a bicycle, though.

The cars are being diverted over Princes Street Bridge and then into the centre, which leads to a followon problem. How to get to the centre. Clearly the scale of the emergency is such that cars are being forced to use the buses only route, such as this car W932GSO appears to be doing 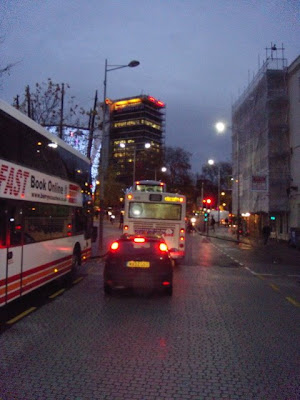 As our correspondent says


﻿One knock-on effect, however, was that the traffic queue at the Marsh Street/Baldwin Street lights was slightly longer than usual, resulting in some interesting attempts by motorists to pretend to be cyclists instead and mix it with the busses on the centre. This chap was really given a hard time by First's Finest who really made him wait!. 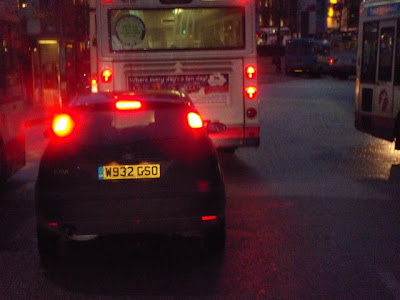 Clearly these emergency roadworks on Cumberland Road, scheduled during a weekday, are a sign of how anti car Bristol is.
Posted by SteveL at 21:17

I've seen a few instances of drivers 'mistaking' themselves for bicycles along here. And when it comes to 4x4 drivers, I'm convinced that five minutes after buying one, you lose the ability to read signs.