This is the junction of Cheltenham Road and Arley Hill, 16:37. The rush hour must have started early, as there are lines of cars in both directions along Cheltenham Road, with consequences for all routes that cross it, whether you do the crossing on foot or by car. Funnily enough, the bike routes work -provided you don't cycle on the pavement. 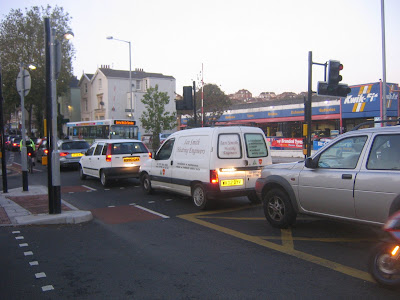 There's no yellow lines over the pedestrian crossing, so the fact that the van
WX02DYV is blocking a crossing which has a green light is technically unimportant, it just stops anyone walking across, especially anyone with a push chair. The Freelander V948SQC, on the other hand, is happily ensconced in the hatched "no entry unless the exit is clear" bit of the junction. 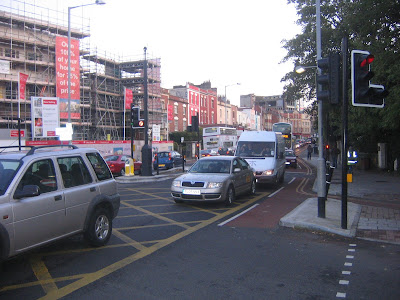 Looking the other way, the drivers of the white van are waving at the camera -they are not blocking the junction, and have nothing to be embarrassed about. The nearer vehicle, FL05NNA -switftcabs?- isn't so happy about being photoed. But he did eventually move back swiftly enough that a car could squeeze between him and the Freelander V948SQC. Provided that Saab was going into Montpelier and not turning right to get towards St James Barton Roundabout or the motorway, they may actually get where they wanted to be. 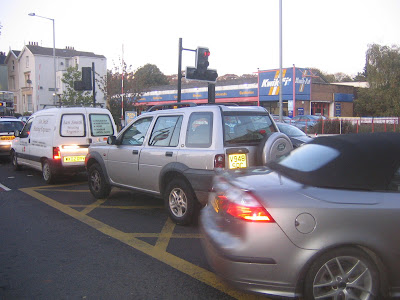 The car behind this Saab didn't get a chance to pull out, and wasn't so happy -he expressed some concerns about the understanding of the drivers and what the yellow hatched lines meant to them. Probably they mean exactly the same as yellow lines alongside pavements: they mean nothing whatsoever.
Posted by SteveL at 12:07

As many of these upright (or is it uptight?) citizens will be be quick to tell us: they pay "road tax", therefore they "own" the road, so they can do whatever they please. So yah-boo-sucks to you...

I was the driver mentioned at the end of this post, the one who was unable to proceed through the green light thanks to the numerous numpties parked in the "Avoid eye contact and pretend we're doing nothing wrong" box. It kind of makes me remember the days when licences were handed out on the basis of a driving test, not on which brand of breakfast cereal you buy.