Cycling across traffic -when the council expects it

The much feared Muller Road/Shaldon Road "Lights of Death" junction isn't sporting any lights today. Not for bicycles coming off the St Werburgh's path, a path due to be uprated over the winter (the path's closure warning signs are up, incidentally).

Normally bikes get a green light after oncoming traffic have had 15s of green, enough for all the vehicles turning right -who assume its a T-junction- to pull out. Some of these drivers get very upset about the whole thing. You need to look at the lights to left, on muller road, and pull out when they go red, before the oncoming cars react to green. It's not fun.

Today they are trying a new experiment. The lights have been turned off. All traffic is dropped to one lane at a time, which is cutting down on vehicle flow. Muller Road, the busy route from the M32 to North-West Bristol, is busy, as is Shaldon Road. Nobody is happy. When they get a chance to go, the cars take it. 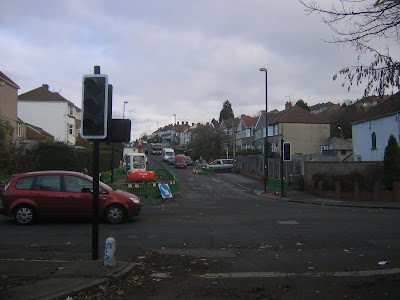 Which makes crossing this road by bike kind of tricky. And on foot. 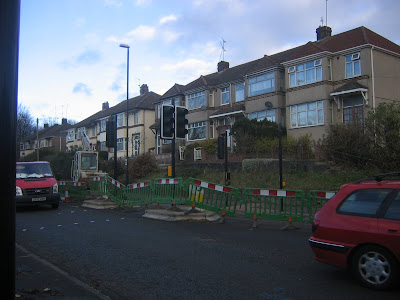 This crossing was actually funded as part of the safe routes to school program. Now it is fenced off half way, so if you run to the island, you will get stuck. 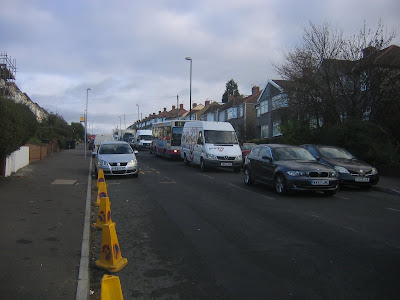 There have been some mitigation measures on Shaldon Road -cones- forcing one of the locals to park in the bus stop instead of their own house.

The reason for all of this is some electricity roadworks, work that has been slowly going down Shaldon Road over the months. It's been good work, with the road left in a nice state afterwards.
Enquiries were made of the very friendly site crew about why we cyclists were left without lights. Apparently someone in the council felt that we didn't need them. Because the traffic was down to single lane, it would be easy to cross. Easy maybe for cyclists whose knees work, cyclists who arent towing children and like cycling across traffic on Muller road because they like the adrenalin rush. But if you do want that experience, better to go to Ashton Court and have some mud fun, not seeing if you can outrace the transit van that has the green light on Muller Road.

Stephen Webster is the name of the council contact. I wonder, does he have an email address? Does he have scientific evidence to back up his theory that its OK for bikes to cycle across Muller Road traffic when its down to single lane?
Posted by Bristol Traffic at 21:59

As far as I know everyone in BCC has an email address made by putting a dot between first and last names, then @bristol.gov.uk , so try stephen.webster@bristol.gov.uk for the officer in question.

Thanks all. I have had the following officer response...

"The problem at Shaldon Rd is that there were works to repair the water main and, when they excavated the road to access the pipe, they found a collapsed sewer which has turned a small job into a big one."

"3 way temporary lights have been installed and they are causing some delay; the single lane has since been increased to 2 lanes to provide a right turn lane into Shaldon Rd."

"Road works are now expected to continue until December 12th, although hopefully they won't have to be in the carriageway all of the time."

Sounds like a junction to avoid for the next two weeks! Hope this is useful.

Jon thats interesting background but it doesnt address the problem raised. Did the officer think the enquiry was from an angry motorist?
Steve L raises an important question about how the traffic light decision at this junction was made, and by whom, which needs follow up. Presumably this is in ashley ward and you are answering as local councillor. Can you do this if not doing doing so already?
There is a real risk to cyclists here, (and a different but also real risk at the same junction prior to the temporary lights).
I trust that behind the scenes you are making sure this is sorted out because it is dangerous, unacceptable and easily remedied.

Hi Tomato
No, this is in Lockleaze ward, but I saw the entry and asked a friendly officer for some background, hence reply posted. I have sent a follow up question and will also forward your comment, but may not get an answer until after the weekend.
Jon

I have had the following response on the traffic light logic. The officer suggested that "The flow from Station Lane is virtually nothing as there is only one premise down and we did not want to introduce a fourth stage (it would have produced major delays across the network).

"We did however increase the intergreen to allow vehicles, and cyclists in this case, more time to pull out between other stages."

Hopefully the work will soon be complete and the lights can come down.