Not seen this before, but here at the junction of Nine Tree Hill and Cheltenham Road: a nice bike that is short of a pair of front forks. 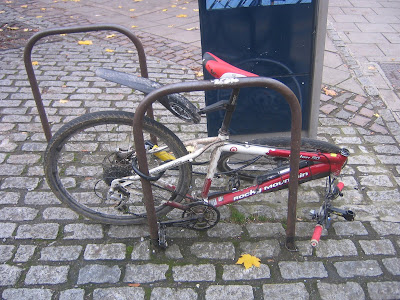 This is a nice bike: XT/raceface drivetrain; presumably the front forks were good kit too. And equally presumably, whoever nicked the forks -which implies they had an allen key set- knew that. Moral: ride round town in something nobody wants.

It also shows another thing we'd like for a cycling city: "honeypot" bikes to catch people trying to steal bikes and bits from them.

What a sickening sight! This has happened to me before and it costs a small fortune replacing the various components attached to the front forks, handlebars etc. The result is that I'm very careful about where I leave my bike, and I just won't park it outside in the evening, much less overnight.

I've lost two pushbikes and a scooter in my 16 years in Brizzle. 'Honeypot' bikes and scoots is a great idea. they have the 'covert capture car' so lets see something for the two-wheelers!

What we need is some of these Holbech bike racks from Denmark:

I lived on Sydenham road for 3 years, in which I saw many bikes in the exact location being in similar state. I had 3 bikes stolen from outside my house, all which I'd brought brand new to cycle up to Filton for work! I reported all the stolen bikes to the police when the robberies happened, with full serial number and details.. nothing ever came of it.

I remember even chasing the guy steeling my brand new bike up to the Arches, shouting out how I needed my bike to cycle to work!

I had an additional 2 bikes stolen from my garden and eventually I decided I'd had enough and moved to a more secure area.

There is no bike security in this particular area. The police hardly care your non-motorised vehicle is stolen and even though Stokes Croft is covered by CCTV, the police don't use it to track down stolen bikes, even if you can pin point the exact time some one took your bike with a full description of the person steeling it.

FYI I now drive, 5 stolen bikes in 3 years! 4 of which where locked up with D-locks at the time of robbery!

-yes. same CCTV experience. If this is a frequent theft area then we need to put some effort into either signing it "your bike will be nicked" or securing it better.

bikerchick get yourself a 16mm chain made by Almax - it'll cost you a fortune and weighs a tonne but it's uncroppable by hand. The biggest hand-croppers thieves can use are 42" ones made by 'Record', and the Almax 16mm withstands this. So does the 'Protector', made by Pragmasis. Basically if you lock your bike to something immovable with something uncuttable then there's nothing more you can do, and generally you'll be ok unless somebody comes along with power tools, but then power tools will cut through a whole lamppost, and they are the reserve of professional thieves after £12k sports bikes.

This is clearly a sensitive topics. I will post up the roadrash I received on the unsuccessful attempt to stop a bike vanishing down Cotham Brow last year; and look at the enhanced racks by the university. We should also think about what we want from a cycling city police force.

This is just baffling . . . I've heard of components being nicked, but a set of forks? That takes real dedication from the thieving toe-rag.

And it's puzzling to see what kind of bike locking strategy coule be used to stop it though . . .

You'd need something other than a normal allen key bolt on the top of the fork. Maybe a Torx bolt, or something even more unusual. Or run a cable between the head of the fork and the cross-bit that moves up and down with the wheel; you'd need to remove the stanchions to steal the forks then.

Jesus, this is mental, i have the exact same frame, Fox forks on the go, maybe he had the same, slightly blingy for a commuter bike? Probably the problem, you need a shite bike for those 7 days a week rides, a cheap GT or something.

you need a bike that looks shite. It doesnt have to be bad, just radiate awfulness. Disk brakes are a warning sign, so are good forks. You want something covered in Halfords Apollo stickers even if its a carbon frame underneath; you want a saddle people laugh at. And you want to consider drop bars. Mountain bikes have more resale value.

There is a company that make bolt through wheel skewers that have a specially keyed bolt head (like car alloy wheel bolts) so that you can only remove them with the correct tool (individual to your bolts). I mention this because they also make a bolt for securing your forks onto the frame (it uses the top nut that goes into the steerer) No idea how toerag proof it is given the weakness of such a location to being wiggled about till it snaps.

I now have myself a halfords special bike for going into town. It's been previously re-sold in cash converters for £9 (and therefore probably previously stolen), and a was a gift from a college owing to its knackered state. Shame really because I would rather ride my nice bike. I will still be gutted if the shit one gets stolen though, the lock costs more than the bike (£10)!