Two weeks ago: the parents outside a school in Cotham debating the best way to key-tattoo a car blocking pedestrian access by the school.

Last week: someone in Clifton gets their tyres let down for parking badly.

This week, opposite Clifton High, the Peugeot Y877TDL gets a polite telling off. 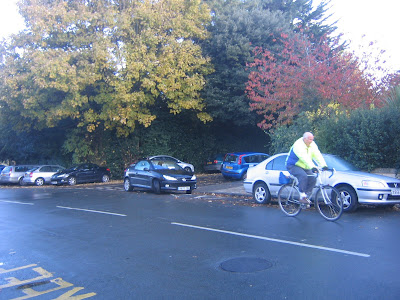 See that black car that looks like it is about to do a U-turn without indicating? It's actually parked in what appears to be the middle of a junction. It also appears to have been there long enough to get a cease-and-desist note 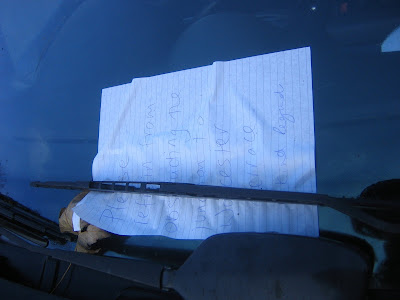 It says "Please refrain from obstructing the junction to worcester terrace. Kind regards. " 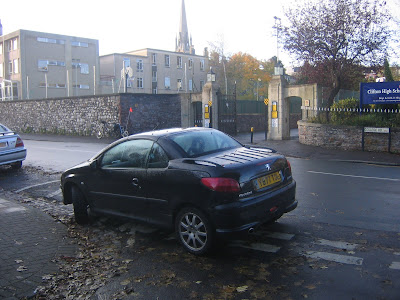 The actual question of whether this car is obstructing the junction is one of debate. It is almost close enough to the corner to block the lowered pavement, so it can consider itself acceptably parked. Yet the letter write felt differently, and felt strongly enough to drop them a note.

Not an abuse rant, not even public web site commentary. No, a pleasant little handwritten letter. But such a well written letter. The only people who write such polite and elegant notes are lawyers. There's so much implicit menace in the sentences that only a lawyer would know to put the please and kind in to take the edge of and to introduce ambiguity in the court case. Take refrain -legal speak for stop doing this and never do it again. Then there's "obstructing the junction". An unambiguous statement of what the author feels the car is up to. B accepting the letter the driver of Y877TDL it probably implicitly accepting that they have done exactly that. Then there's the closing "Kind Regards". Friendly, but with the threat that they are being watched. Yes, a lawyer of some sort wrote this. And have billed the driver a minimum of 1 hours labour and the serving fee for placing it on the windscreen. Subtle.
Posted by SteveL at 11:44