A brief tour of Christchurch Primary school, Clifton. This will not be in any CPZ -that will be a few streets to the south. The lead campaigner in the "Keep the parking free" group lives nearby, so presumably this is the parking he envisages.

The school itself has a little handwritten sign up on the subject, which is new 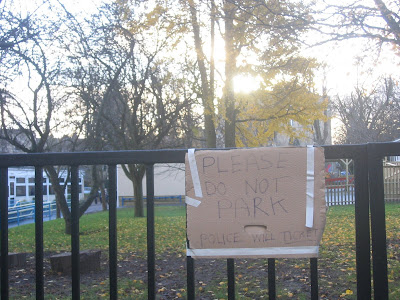 It says "Please do not park police will ticket". Technically that's wrong. In English, "will" implies inevitability, unlike willen in German, which is more aspirational.

The police may ticket. Parking Services may ticket some parking violations, but not those related to parking on the school keep clear zone for which only the police have authority. The sign should be updated to state these facts correctly. Does it have any effect in its current form? 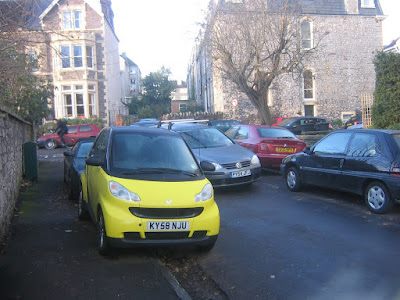 Well, there is is a space in front of the Smartcar KY58NJU, which, by parking half on the pavement leaves enough room for a golf to get by 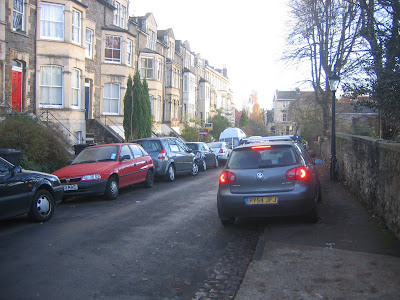 The golf PY54JFG, which also makes sure there is enough room for passing cars when it pulls up at the school gates. 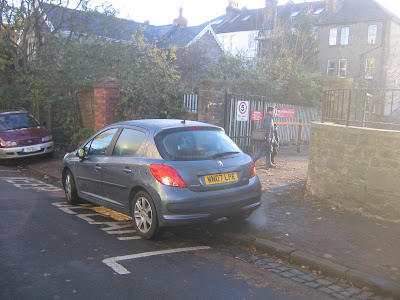 Other cars, such as WN07LPE appear more concerned about pedestrian access than protecting their wing mirrors, so park a bit more on the road in the keep clear zone right in front of the entrance. Far enough out to let people past, and slow down passing cars to 20mph.

When last discussing this school, the need to drop kids off by car came up, with readers commenting on how lazy children were now. Perhaps they are used to travelling by car because that is what they are used to, in which case the question is : why do so many now parents drop the kids off by car instead of walking them in? Increased wealth: two car households are now common, and increased workload: both parents working means that whoever drops the kids off have a limited amount of time between dropoff and work. Also, with more choice in schooling -the old "this postcode means that school" rule is gone -hence some kids have further to go. These parents have no choice but to drive, hence they have no option other than parking on the pavement, the keep clear zone or the school-no-parking area.
Posted by Bristol Traffic at 07:26