Round the corner from where we saw a car ticketed for being on the pavement, I was hoping to see some more tickets along Kingsdown Parade, whose pavement on one side has effectively been lost to cars. No, no tickets. 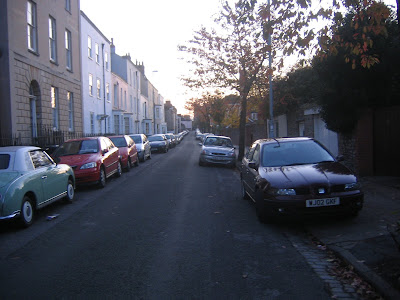 But what's that on the fiesta X241YCD? A leaflet? From the fire brigade? 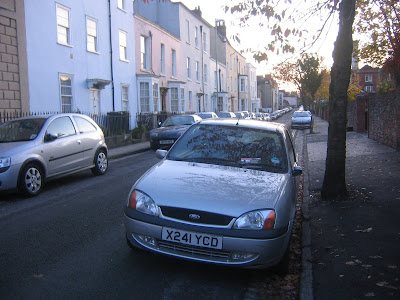 It says "Protecting our community. In streets like these, thoughtless parking can prevent fire engines getting through" 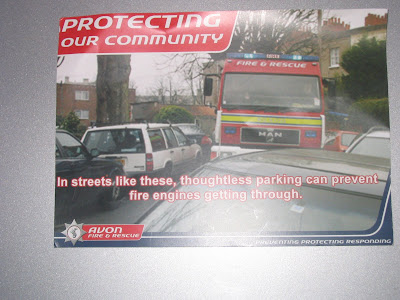 Along this stretch of road. This is is the only car with such a leaflet. Interestingly, it is the only car parked with all wheels on the road, rather than the pavement. It is not on a keep clear sign, or double yellow lines. It is the only vehicle legally parked on that side of the road, for the entire length of the road. And because of that, it is the one to earn the telling off from the emergency services for thoughtless parking. 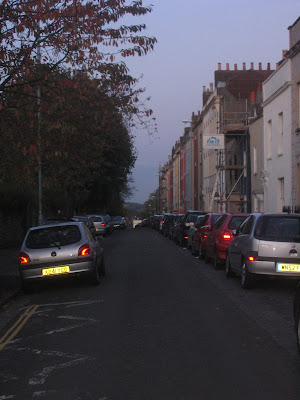 Some people think this web site is some kind of satirical site. It is not. It is a documentary. We cannot make things like this up. Here we have Kingsdown on a Friday evening, the only car to get a ticket for pavement parking did so because it made it hard for cars to get past; the only car to get a note telling it that it was parked "thoughtlessly" was the one parked legally.

Someone in this city is playing a bigger game of irony than anything we can put together. That or they don't have a clue what they are doing.
Posted by SteveL at 08:04

I speechless. This beggars belief.

As you say, you couldn't make it up.

i'm with you on the whole but i don't see why this situations as balmy as you make out The fire brigade's sticker was stuck to the only vehicle whichwas (after bad parking by many more) actually in the way of a possible fire engine.
I can understand why the fire brigade are only able to target the straws that break camel's backs, the rest of it's not their issue.