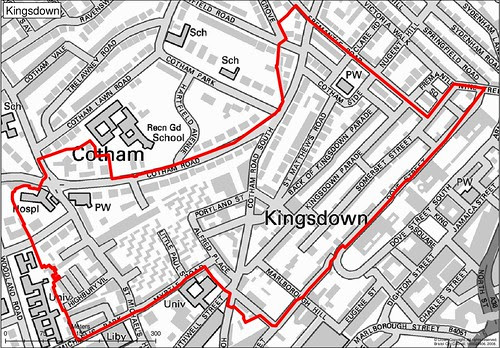 Here is the Kingsdown CPZ. The southern border appears to directly abut the existing CPZ. On the western side, however, there is a no mans land -(henforce, the DMZ, De-Militarized Zone) between this, the Residents Parking Zone and the Central Parking Zone that begins a couple of streets west. The area in between is mostly university/school buildings, with the front gardens all turned into parking. Having a DMZ between the CPZ and the RPZ doesn't make sense, as people will still drive in hoping to get their car on the pavements there, go round in circles and then, giving up, drive past this new RPZ to the other bits of clifton and redland. We have very limited data on who parks near the university, incidentally. We can see that the area's cycling access/parking takes second place to staff parking, and we know that lots of cars park badly there, but we don't know if they are students (unlikely, you need to get there before 0900), staff or other commuters.

North of the zone, its a bit blurred. Assuming that when the red line goes through someone's garden they are in the zone, the doctors by the St Michael's hill roundabout get a permit, but the residents of the northern' side of Cotham Road don't get the option of parking in front of their houses. Presumably that detail will be resolved during consultation.

More analysis and pictures to follow over the next few days.

I live fairly close to Woodland Road and have been very interested in who exactly parks in these few roads. From what I've observed it seems that;

-Businesses around the university areas (eg: White Ladies road: the beep, a private health care and other offices) and other small offices at the back of White ladies road like ones on Elmdale road (S-cool, Hotel, etc) have sorted out their parking problems by simply providing private parking space for their employees.

-There seem to be very few commuters who actually park here and if they do, they turn up around 7am to make sure they get a place.

-The shoppers (for the Clifton Triangle): Well they mainly go for the pay and display areas and there's usually a reasonable amount of spaces available and probably don't mind the charge as they are about to shop in expensive shops ;), of course after they have circles a few times to make sure there isn't a free space first.

-Students
Which brings me to the main users/parkers of this area which I think are the students. You can see the clear difference in parking congestion around this area out of academic term times, the roads look almost twice as big, and many parking spaces are available.

I think we should be thinking of putting more pressure on the universities not to allow students to bring cars to town especially if they live in the surrounding areas, which they usually do icbw.

I'm pretty sure that staff from universities just simply don't bother driving to work if they don't have a permit as they soon come to term with there simply isn't any space to park, which might explain why so many ride motorcycles-)

So the question is, should the council consider not issuing parking permits to student households in the CPZ areas? why would you need to drive as a student if your main working/studying area is in walking distance?

This is interesting. More research is needed. I'd assumed that given all spaces were gone by 9 the students were too late for them, but this implies otherwise. The only place I suspected students were parking was the limited-park time zones on Woodland Road and Tyndall's avenue. If you had the car and the money, you could nip in for a single lecture and then back again -presumably back to somewhere without parking problems

In the CPZ, the costing and car limits are the same for all households, so you won't get more than 3 cars/flat. I also have some evidence that most of them don't move during weekdays -that's the case in Cotham-. So they'll be paying more for cars that don't get used much.