Now the reason for keeping the CPZ responses a secret becomes clear: the zones that get rolled out may not match the response areas.

Here's the zoomed in map of Kingsdown. The church between the 50.4 and the 40.5 zones is the one at the top of St Michael's Hill, the curving road to the right of it is Cotham Road. The church above the 51.7% zone is St Matthews, on Cotham side. Below the 50.4-51.7 section is a 50% vote zone, which includes Alfred Place and Henrietta Street. According to this ward-by-ward map none of these areas voted for it. 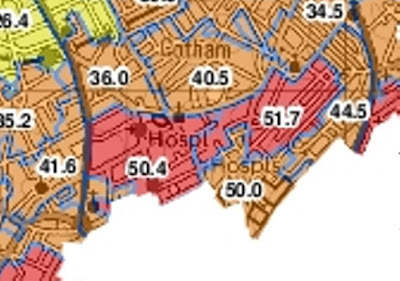 While we've all be analysing our copy of the map, round the city, the Evening Post gets an official briefing, which it sticks up online at some point during the day. And this is where it gets interesting.

When the EP article went up it listed the roads and the hours of this zone. It said weekdays, 9-5 and listed the streets.

That's an interesting list, because all the roads listed in bold are not actually in the zones that voted over 50% for it. Alfred Place and Henrietta street are in an area that came in at exactly 50%, but if they were left out you'd have a free to park zone between the central CPZ and new ones. As for Cotham Road, well, when the council did what pretends to be pedestrian safety improvements a few years back, they pretty much marked it out ready for a CPZ. Its time has arrived.

Polling someone who lives in one of those fringe streets, they seemed fairly happy, primarily because of the 9-5 weekday hours rather than 7x24 they were were told they'd get. That and the limited number of free tickets mean some visitors can be handled, though the number is limited enough you don't want to resell them at a profit. Because the hours start at 9, it will make school dropoffs better. No commuters, you park near the school, then get home. Excellent!

Anyway. It gets more interesting. If you go to the Evening Post article now, it doesn't list the streets or the hours. It says

Kingsdown and Brandon Hill were two of the areas with the most positive feedback – more than 50 per cent in both cases.

These areas are now set to have further public consultation as to the exact proposals: which roads the zone would extend to, hours of operation and so on.

Sometime between 1800 and 2200 on Friday, the story changed. The specifics on streets -more than just the areas with over 50% of responses positive- and the the hours -less than orginally demanded- vanished. Why? Were the results of the second community consultation accidentally published before that consultation took place?

Furthermore is it ethical for a newspaper to change its stories without noting it? The New York Times does.
Posted by SteveL at 23:08

I also saw the previous version of the EP report but didn't think to save a copy. However I can remember something of the details given for the proposed Clifton RPS.

It was to operate until 9 pm to address the difficulties caused by evening parking generated by bars and restaurants and included the block of streets bounded by Queens road, Clifton Road, Constitution Hill and Jacobs Wells Road.

That's the area showing 55.6% support plus the streets to the north up to Queens road. It almost certainly will have included the streets on Brandon Hill (62.5%) and may also have included streets further south but I'm not so sure of that.

I live just beyond that zone in an area that voted 32.9% in support (which included me) and there will be a knock-on effect for us. I hope we and other adjacent areas get the opportunity to rethink.

If the EP are going to edit stories after online publication then we'd better start systematically saving copies of anything controversial.

The BBC reported the hours of operation but not the streets involved, on Points West, and those details are still on their website at the time of writing: http://news.bbc.co.uk/1/hi/england/bristol/7730544.stm

I write not as an apologist for the crass way in which this administration deals with the general public in general and the media in particular, but I have made some enquiries.

I understand that the original Evening Post story was incorrect. It apparently gave the impression that it was a "done deal", which is not correct.

The report and appendices that are being discussed at the Scrutiny meeting on 24th November are unfortunately still not up on the Council website, and I have asked officers that this be corrected urgently.

I attended an officer briefing yesterday with other councillors and we were assured that the two proposed pilot areas would now be the subject of further resident consultation, probably after Christmas.

The borders of the two schemes are also up for discussion, as there were a number of possible anomalies spotted - indeed, the maps are of Super Output Areas, but the two proposed pilot areas are not necessarily contiguous.

The data has been analysed on postcode basis as well as SON, hence some streets that lie in an area on the map may be less than 50%.

It has long been Bristol Lib Dem policy to support residents parking, where people want it and I think that the introduction in these two pilot areas has the potential to significantly improve the lives of residents, particularly as the process may also be able to address corner and pavement parking, 20mph speed limits and improved business access to passing trade.

If anyone wants the documents that are going to Scrutiny on 24th, then I can email them to you (they are 8Mb) jon dot rogers at bristol.gov.uk

The suggested hours of operation in the report are:

The difference is, I understand, based on the responses from residents about the times that they have problems. The times are of course subject to the consulatation process.

Just spotted a typo on page 7 of the report to scrutiny. It says "This will allow us to implement three different schemes" My bold!

There are two other areas with over 50% on the map. Redcliffe and St Pauls. I have asked, and St Pauls was not included among the pilots because the response rate was only 8% compared to 25-35% in the two chosen areas.

That's a good point about the response rates. But even where the response rate is 35%, the 51% or so of support may turn into overwhelming rejection when people realise that it's serious and apathy turns to antipathy.

The problem with all this is that all this talk of "voting" - implying this consultation was an election or referendum is not that useful and is actually bogus.

For starters elections and referenda are usually free, fair and open. That means we are able to see the raw data (ie votes cast). We are not simply presented with a percentage without evidence or data that explains where the result came from. Neither was this process sold to us as a referendum or styled like a referendum. It was sold as a detailed consultation.

Why is it being interpreted likr a referendum?

Elections and referenda are simple polls. This consultation was a complex 4 or 5 of the page questionaire from which a simple percentage figure has somehow been extrapolated without much explanation.

The consultation is actually better understood as a piece of ham-fisted and inept market research. Usually, of course market research, is done using carefully selected small samples, whereas this has been done using randomly-sized self-selecting samples.

The results, which show something between 0-20% of the population in favour of what is supposed to be a popular/populist product are disastrous. Any serious business person or marketeer would be urgently reassessing their product in the light of these figures, not spinning the results as positive.

You don't spin market research because you're spinning yourself. In the real world, if the public don't like your product, they ain't gonna buy it and you're going to lose a lot of money. Claiming otherwise is fooling yourself not the public and a business would collapse if they did it.

The Lib Dems have already strongly criticised the "consultation" process

And I don't know why this administration is so secretive about the figures. Their motto seems to be "information is power" and so by seeking to keep others in ignorance perhaps they feel superior. They aren't!

They seem afraid that others might draw different conclusions. That is what democracy is all about!

However, the two proposed residents parking pilot areas "identified" in the report have long reported problems with parking, and of those people who responded in those areas, a majority said "yes" to a scheme. Only 16.9% of residents in Kingsdown and 17.5% in Clifton (Brandon Hill) said there was "no need for a residents parking scheme in their area"

Personally I think the discussion with residents, businesses, councillors and officers in those areas should now turn to identifying the most suitable configuration for each pilot area including, amongst other things, hours of operation and the borders of the two schemes proposed.

Finally, residents in a number of areas in the City have responded that there is "no need for a scheme , parking is not a problem". Their views should be respected.