"Bristol Dave" has got hold of the Residents Parking Zone voting results. 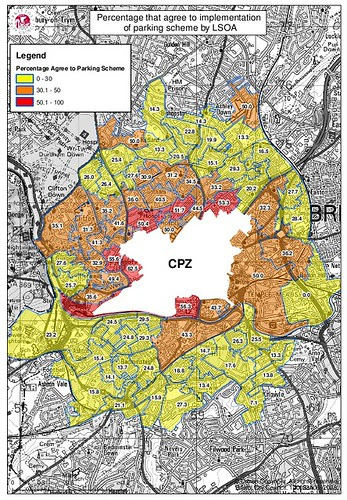 The presentation is a bit weak in that the 30%-50% band is one colour -orange- and that is where much of the variation lies. If you had a better gradient it would probably show more of a trend towards "the closer to town you live, the more likely you are to vote for this".There's a ring around the current CPZ that is about 50% in favour -those places where park and walk is a viable commute policy for outsiders. But with a 7x24 and a pay-for-visitors policy, the scheme was not just trying to stop commuters parking in your street, it was to make you pay whenever you visited anyone else in the city. A lot of the outskirts appear to have noticed this fact. Kingsdown looks like it will be first to go, which will have implications for the neighbours.

Rollout of the RPZ will be really beneficial to anyone driving to school as long as the council doesn't have the audacity to enforce the rules between 8 and 9. It should increase the amount of parking space by the schools, and offer more parents somewhere to park afterwards. I had an excellent discussion with a parent outside Christchurch School last week, someone defending their right to park on the pavement on the "school keep clear" zone. They have to park there because there is nowhere else to park, then they go home over the downs, which must be a least a mile away -but in an area that doesn't suffer from commuter parking. Once the RPZ is rolled out, the right to drive your kid to school won't be limited to those who have driveways or are carrying on to work.
[updated]: moved the image as the original one apparently went off-line.
Posted by SteveL at 07:52

Now when I was small, I lived about a mile from my school. And we walked there. My mother would walk me, and her friends' kids, the mile to school every morning, then walk home again; and do the same in the evening. Every schoolday until I started secondary school, by which time she assumed I could get to school by myself. Were the 1980s really that different to today?

FP, you're mother walked with you? What a softy! When I went to primary school in the 1950s we use to walk by ourselves, 5 miles there and back, in all weathers, then after school we had to clean the whole house .......

This consultation was a joke, and the lady from the council I spoke to at the Bedminster Library session admitted as much and said she wouldn't be surprised if they had to do it all again.

The council proposed a 24/7 blanket scheme short on detail, and it was worded in a fear-inducing take-it-or-leave-it, its-this-or-nothing manner. I voted against the proposal, but I'm actually in favour of some kind of RPS that is weekdays only - it only needs 2 hours in the morning, job done. I don't mind paying either - just give each area a tailored scheme that helps them!

They need to start again if they're to get an accurate picture of what people really need.

I didnt vote but I wrote the reponse for our household -which was negative. I felt that by going for 7x24 and the pricing model was almost designed to create an opposition. If it was 5x8 then you would have residents voting in the core. This would leave the "too many cars in montpelier" problem, but you can deal with that more subtly, after the CPZ is rolled out.

I linked to his image. It could be the image hosting service has overloaded. I shall upload a copy and relink it elsewhere

The image is now on Flickr. In the US, out of range of the lawyers.

My kids walked the 3/4 mile to Primary School. They now walk the 1 1/4 miles to Secondary School. They wouldn't have it any other way because they both dislike car travel (nothing to do with propaganda from me I hasten to add - we do run motor vehicles!).

It doesn't go unnoticed and unremarked that most of their contemporaries get driven to school, even though many of them live closer to the school. Number One Offspring now in 2nd year of 6th form and now most of her classmates drive themselves to school, even those who previously walked! In spite of intensive peer pressure Number One resolutely refuses even to consider driving lessons, let alone drive. She's her own person. I'm proud of her. And it indicates some small hope for the future. Perhaps.